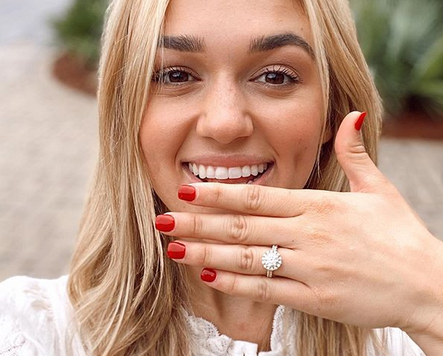 Sadie Robertson is dishing on her wedding to fiancé Christian Huff. The young couple is expected to wed later this month in an intimate family gathering. The Duck Dynasty star shocked fans earlier this year when she announced she was getting engaged. The 22-year-old has already done a lot at such a young age. Not only is she known for her appearances on the A&E reality series and Dancing With the Stars, but she also has a successful blog and podcast called Live Original.

Sadie Roberston is planning to say, “I do” to her sweetheart in a major way. Sadie Roberston took time out of her busy schedule to speak to Us Weekly about her big day. Robertson plans to marry Huff later this month at her home in Louisiana. Much like Robertson herself, she wants to keep it low-key and down to earth. For example, she’ll serve milkshakes instead of alcoholic drinks during the reception. Robertson has been wanting to get married in her family home for a long time.

“My whole life I always said I wanted to get married at my house,” she revealed. “I’ve been in California and Tennessee and all these different places and I think for me, when I’m home, it’s like my safe place. It’s like just a place of people.”

Robertson revealed she didn’t just say “yes” when Huff asked for her hand in marriage. She screamed it out loud. Huff knew Robertson was the one and proposed to her on his 19th birthday back in June. The two got engaged after just 11 months of dating. The former Dancing With the Stars contestant said that she was “the happiest human in the world” when Huff proposed to her on his special day.

I AM SO PROUD OF YOU. when I see you I see a man overwhelmed by the reckless love and grace of God. You walk with that love and grace so strong and confidently with integrity. You’re hidden in Jesus babe… Proud of how you share your heart! Your testimony is going to bring hope to so many people! If your in college especially or high school or just a human who needs truth GO LISTEN to @whoathatsgoodpodcast ! (YES IT IS BACK – link in bio) and Christian BROUGHT 🔥 ! I love his heart so much and I’m so thankful my little introvert shared it with the world today♥️ forever thankful to be your woman – you make me better.

Sadie is hoping Mark Ballas will be at wedding

Robertson also gave Us Weekly the details of her gigantic guest list. It includes her former DWTS partner, Mark Ballas, who shares the same wedding date. Robertson exclaimed that she hopes that Ballas will be able to make it in time to see her and Huff get married. The two are still very close, so it would be special to see him at her wedding. She’s also still hoping that Ballas will make it so he can walk her down the aisle instead of her father.

Despite the famous faces, she still wants to keep her wedding light-hearted and family-friendly. Robertson revealed that her wedding won’t be aired in a special episode of Duck Dynasty. It’ll just have private elements that are tied to her family. Robertson and Huff will host over 600 wedding guests at the Robertson’s family home. The bride-to-be called the family home her “safe place.”

Sadie Roberston moves into a new home, but delays plan to raise a family

As previously reported via Us Weekly, Saturday, Nov. 9, Robertson moved into her new digs. She showed off her new place on Instagram including the caption, “Moving: ALL THE FEELS.” Despite overcoming this major milestone, Robertson is still very connected to her family home. She’s always going to make time for her old home and family no matter what.

While Robertson would love to have children with Huff, she revealed that she wants to enjoy being newlyweds before introducing kids into the equation. Even though Robertson and Huff both come from a big family, they still want to wait to have children. They just want to find out what it’s like to be a married couple.

Other details about their special day

As for the Duck Dynasty star, she and her fiancé want to make their special day as intimate as possible. The couple plans to write down their own vows and share them in front of their guests. Robertson says she wants to keep her vows a surprise from Huff. She can’t wait to share them with her love in front of the other important people in her life. She wants everyone to feel the love they have for one another.

Of course, the couple will have their first dance following the wedding. They plan to dance to a live performance of “Known” by Christian rock singer Tauren Wells. Even though Robertson is a major fan, it was Wells who was the one who reached out to Robertson on social media and asked her if he could perform at their wedding.

Prior to Christian Huff, Sadie Robertson dated Austin North in 2018, dated Trevor Knight in 2016, and was in a serious relationship with Blake Coward from 2014 to 2016.