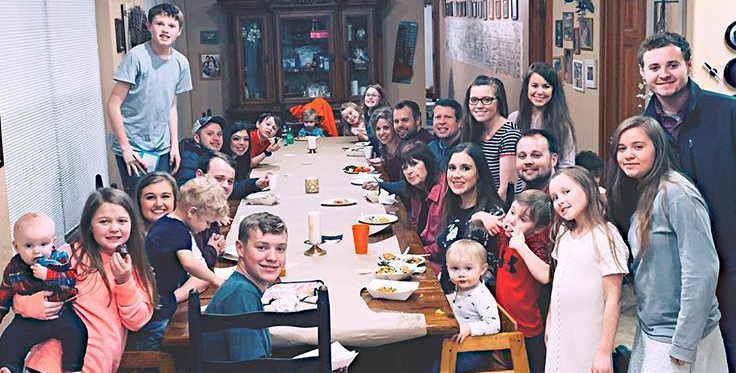 With 19 kids, and several of them married and starting their own families, Michelle and Jim Bob Duggar are sure to have lots of grandchildren. It can be confusing for fans to keep track of their grandkids and the expectant moms in the family.

These photos make my heart overflow!! Precious memories that we will forever be grateful to have. Love these ladies so very much!! . Joy and sorrow seem to run on parallel tracks and often arrive at the same time. Each day of our lives delightful things occur, reasons to celebrate or smile, and often, at that exact time, there are disappointing or painful things that happen to us or those we love. . Our goal in life is not to figure out how to live only on the “joy” side of the tracks, avoiding all sorrow, but to continually look to Christ who has promised to never leave us or forsake us. Blessed be the name of the Lord! . We look forward to seeing Grandma Mary and baby Annabell again in Heaven someday! We celebrate the lives that have been lived, both long and short, and we rejoice with anticipation of the new little ones we can’t wait to hold! 💕 . Photographer Credit: Lori Blythe/TLC

Earlier this year, in May, Jessa and Ben Seewald’s baby girl Ivy Jane arrived. Joy-Anna and Austin Forsyth were expecting their second child and were due this November. Sadly, they lost the baby at 20 weeks gestation.

In particular, this is a busy time of year for the big family. In the past couple of weeks, two babies have been born. Joe and Kendra welcomed their second child, Addison Renee, to the world a little over a week ago. Then, on Friday, Josiah and Lauren’s first baby, Bella Milagro was born.

Two more Duggar women, Anna and Abbie, are still expecting too. Anna is currently pregnant with her sixth child and is due around November 16. This means that her baby could arrive any day. Actually, many fans were expecting her baby to arrive before Lauren’s.

Abbie is pregnant with her first child. She is due on January 14, 2020. Both Abbie and Anna are expecting baby girls.

How many Duggar grandchildren are there?

As of Friday, November 8, Michelle and Jim Bob are the proud grandparents of 15 children. This includes:

That list is going to grow any day now with Anna’s sixth child being born any day now. Then, Abbie will give birth in January. Aside from those two pregnant Duggar women, no other family members have announced a pregnancy.

SO thrilled to be in California spending time with @jingervuolo!! 💞

If another family member is expecting, it’s likely to be Jill or Jinger. Joy is still giving her body time to heal from the loss. Jessa recently gave birth, as did several of the other women. The Duggar family’s cousin Amy King also gave birth recently. She had her first son, Daxton, in October.

Are you looking forward to more Duggar baby news? When do you think Anna will give birth? How about Abbie? Leave a comment below!

Don’t miss Counting On on TLC on Tuesdays.

‘Bold And The Beautiful’ Don Diamont Just Filed Restraining Order
Which Duggar Courtships Seem To Be In The Works?
‘Outer Banks’ Season 2: When Is It Coming To Netflix?
Erika Jayne Just Got Dumped By Her Lawyers — Here’s Why
‘RHOC’ HUGE Cast Shake-Up: Who’s In & Who’s Out For Season 16?