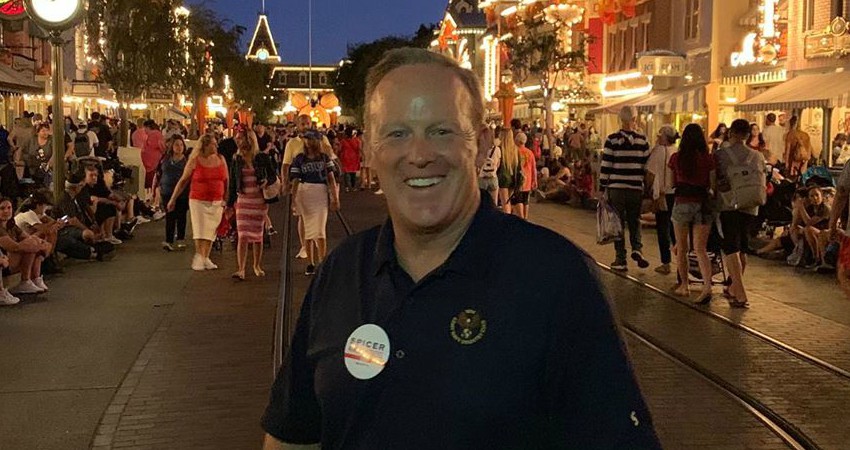 Dancing With The Stars is thriving on controversy this season. With ratings down, ABC’s head honchos decided to leave the show off the springtime schedule. Fans were forced to wait until September to get their dancing fix.

In a surprising move, the show chose a divisive ‘celebrity’ for Season 28. Sean Spicer acted as President Trump’s White House press secretary for a year before resigning for undisclosed reasons. However, Spicer remains in Trump’s good graces.

Voters Save Spicer Despite Low Dancing With The Stars Scores

Throughout his time on DWTS, Spicer repeatedly has the lowest or second-lowest overall score from the judges. However, he has yet to be in the bottom two. This is because his fans and supporters vote enough to keep him safe from elimination.

It’s gotten to the point where some fans are outraged that Spicer is still on the show while contestants they feel are better dancers get sent home.

Just tell me which is the Bye-Bye-Sean-Spicer night and I'm all in. #DWTS https://t.co/dLSesnUWed

A contestant who earned a perfect score last week, Ally Brooks, somehow ended up in the bottom two. The judges ultimately chose to save her from elimination. By comparison, Spicer had earned just 20 points out of a possible 30.

Even the usually neutral judges are starting to lose patience with Spicer remaining on the show. Their criticism of his dancing has taken a sharp turn compared to their previous encouraging words. Resident grumpy judge, Len Goodman, threw some shade at Spicer last week.

Spicer Appears on Fox News to Discuss His Staying Power

During a recent appearance on Fox News @ Night, Spicer gave his thoughts on the controversy surrounding DWTS. The former press secretary expressed gratitude for viewers who see that he is giving the dances his all and improving each week.

It’s Boy Band/Girl Group Night this Monday on @dancingabc I’ll be dancing an Argentine Tango and a Foxtrot with the amazing @jennajohnson again this week. Our prayers continue to go out to Lindsay and her family. We are going to make you proud!

“There’s no question that among the other people left on the show I’m not the best, but I think if you’re looking for the best, this is not the show.”

He went on to point out that the voting has been the same for all 28 seasons. Spicer defiantly suggests that the show should “change the rules” if they don’t like them.

However, the DWTS cast member does have a good sense of humor about the fuss Spicer recently retweeted a tweet by temporary partner, Jenna Johnson. The tweet is a video clip of her shocked expression when they were declared safe.

That makes two of us. But seriously thank you to everyone who believed in me and voted, can’t thank you all enough. Especially Jenna for stepping in, and Lindsay for getting me here. @lindsayarnold @JennaJohnson @DancingABC https://t.co/Sgv2BnB8wj

Perhaps no one is more shocked than Spicer himself that he hasn’t been eliminated from Dancing With The Stars yet.

“The idea that I’m on a dancing show in the quarterfinals is pretty unbelievable.”

Tune in to Dancing With The Stars Mondays on ABC to see how much longer Sean Spicer lasts before viewers can’t save him.