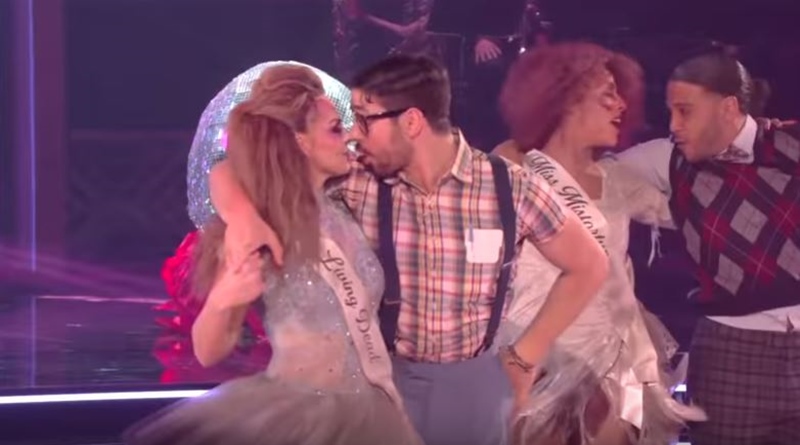 DWTS Halloween Night certainly lived up to the spooky and the weird. Mostly, from the judges’ odd decisions, and the fact that lowest-scoring dancer Sean Spicer still remains in the show.

Hannah B and Alan managed to stay in, with conflicting opinions between the judges. And Karamo ended up eliminated, once again a split decision by the judges.

Hannah and Alan Bersten managed a good dance. No sign of Hannah’s sore feet showed. TV Shows Ace wrote ahead of the show, “her feet feel so sore that she begged fans for advice on her Instagram Stories. Plus, Adam Bersten agreed ‘it’s been a super-long week,’ and shared a short clip of Hannah’s swollen feet.”

Mind you, judge Carrie said she felt something “was missing.” But for once, Len managed to say a few nice things and gave her a nine. The other two judges hit the eights.

But DWTS fans grow increasingly upset with Carrie. On YouTube, one fan noted, “I haven’t always been the biggest fan of Hannah, but I do believe Carrie Ann Inaba needs to stop singling her out. Ever since Hannah has let it be known that Carrie Ann’s comments are hurtful, it’s like she is going out of her way know to tear Hannah down…tonight, she even singled her out of several other people after the team dance. Finally when she brought Hannah to tears, then she stopped… You can always tell who Carrie’s favorites are that’s a given…but you can also tell who her least favorite are also. Not cool Carrie! Don’t be a bully!!!!”

Meanwhile, Sean Spicer managed to stay in again. The most amazing survivor of the show managed that despite scoring a miserable three sixes. ET reported that Len said, “You know you’re not the best dancer on the show… but you always come out and try your hardest and give it your all.”

As he danced the part of a monster, Bruno said, the “monster part was perfection but the dancing part was less so.” And, Carrie said, “it was a dance only your mummy could love,” using a pun to really sting the star.

At the end of the evening, Sean and Lindsay sat rock bottom with 18, a full seven points below Kate and Pasha who so very nearly got sent home. But, that seems to make little difference to Spicer. Somehow, others get eliminated week after week and fans grow angry about it.

Sean Spicer and Lindsay Arnold danced the Jive to “Monster Mash” by Atwater Men’s Club. You can see the video below to get an idea of it.

One fan said, “This is week 7? Haven’t watched for years, but good God, DWTS has hit rock bottom. Spicer just stood there and waved his arms. Unbelievable.”

Karamo gets eliminated over a split decision

The choice over who went home from Dancing with the Stars ended up between Kate and Pasha and Karamo and Jenna. Carrie liked Karamo, Bruno liked Kate, and  Len settled the decision. So, it’s goodbye to Karamo.

What did you think of the judge’s decisions? Are you surprised to see Sean Spicer still in the competition? Did you enjoy watching Hannah B and Alan dance? Sound off your thoughts in the comments below.