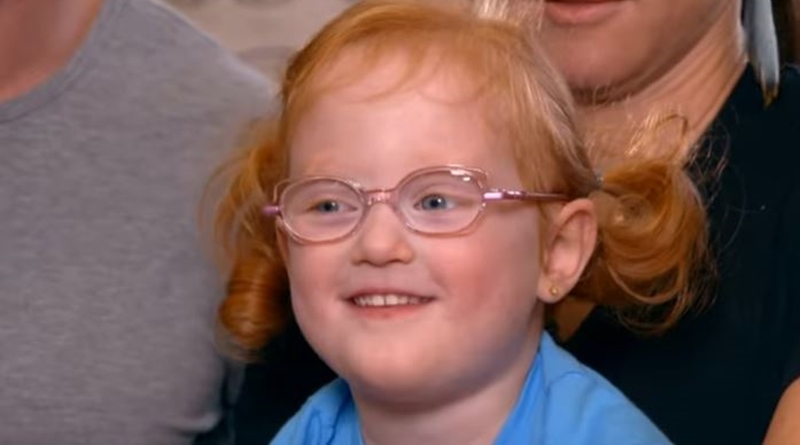 OutDaughtered quints shrieked with fun and laughter when Adam got out all the old Halloween stuff from storage. But Hazel’s not so sure about the giant blow-up with a scary pumpkin face. It seems she’s not overly happy with the skeleton either. Adam of course playfully scared all the kids. But, maybe Halloween’s not Hazel’s favorite time of the year. It’s certain she’s not impressed with “scary daddy.”

Adam Busby’s been prepping for Halloween for a while now. By the middle of September, he already got some new stuff and scared little Beaux with a clown mask. Back then, we reported, “Beaux…got a nervous moment when Adam misbehaved. Unsure whether to run to mommy and hide or to bravely protect Danielle, the poor little fellow got a bit upset. The season of silly costumes comes soon, as fall approaches and the Outdaughtered dad’s so ready for it. Still six weeks out from Halloween, and Adam’s already made sure he’s got his scary clown mask.

Now, in a short clip that @itsabuzzworld shared to their Instagram Stories, we saw Adam getting out a giant inflatable blow-up. It comes with a glowing and scary pumpkin head. The kids love watching him blow it up. Adam says it’s been in storage since last year. The girls suggest that Hazel won’t like it. And, yep, they are totally so right. She liked the skeleton that Adam teased the quints with even less. But, hopefully, at the end of October, she’ll get over her fears and enjoy the fun of it all.

The quints go and fetch Hazel to come and see the scary scene. Reluctant, she allows herself to be led toward Adam. Then he growls out really loud, “Hooooooor!” and she screams and runs away as fast as her little legs can take her. Danielle says, “such a scary daddy.” Next, we see the girls comforting Hazel, who’s crying. But, she’s not getting much sympathy from OutDaughtered mom, Danielle. Danielle says “it’s so funny.”

Judging by Adam’s enthusiasm for Halloween, it looks like the rest of October could be fraught with fear for the cute little girl. Maybe its her news glasses, and she can see every scary detail. But, it’s a good bet that when it comes to candy time, she may ease up a bit. Certainly, the other quints and Blayke get into the spirit of it all with enthusiasm. Maybe we’ll see more clips nearer the time when the OutDaughtered family gets all the decorations up.

What do you think about poor little Hazel being so scared of the scary blow-up that Adam Busby took out for Halloween? Do you think she’ll get over it and enjoy the season? Sound off your thoughts in the comments below.