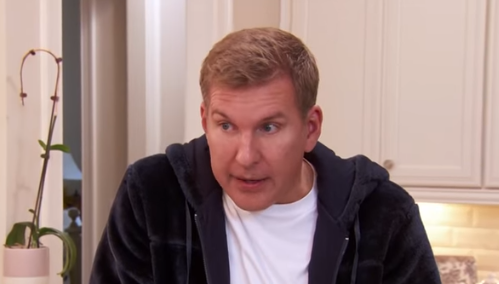 Todd Chrisley has been cleared of state tax evasion charges in Georgia and is enjoying every moment of it. But, he has also begun going public stating that some members of the state’s government are “corrupt.”

Todd Chrisley Says The Case Should Be A ‘Wake-Up’ Call

Allegations of corruption were in a statement that the couple released after the settlement was official.

“Since March 2017 we have lived with this storm of lies. Fraudulent misrepresentations and betrayal regarding the false claims alleged against us with the Georgia Dept of Revenue. We’ve endured press standing outside our homes. Agents confronting our kids in restaurants. Constant leaks to the press to bolster the lies that started this investigation. False claims of millions of dollars owed because the bigger the number the more people want to read about it, only to resolve the matter for pennies on the dollar… We have always relied on the excellent advice of accountants,” Todd Chrisley began the statement.

Julie and I get real and call out the press. Plus we answer your questions about in-law turbulence, medication, and obituary semantics. Go listen to the latest episode of #chrisleyconfessions NOW! @applepodcasts

“This settlement and what we’ve been put through by the GA Dept Of Revenue should be a wake-up call to all taxpayers in the state of Georgia. These folks have the authority to raid your homes, businesses, confront you in public and harass your friends and family and do it with confidence. They have no accountability unless you spend hundreds of thousands of dollars to prove your innocence.”

These comments seem typical for charges this major, but the reality star didn’t stop there.

The Couple Thanked Everyone, Even Those Who Didn’t Believe Them

He continued saying he thanks God for walking them through this part of the storm with grace.

He continued with his thanks to their attorneys, saying they closed the matter out and brought light to the corruption of the Georgia Department of Revenue. Todd also thanked the people who believed in them as well as those who didn’t because their comments made them stronger.

According to Todd Chrisley, there is alleged corruption among the people who worked on his case. He had previously said their former accountant was just a bitter ex-employee, as they had turned informant.

Chrisley never mentioned specifically what the government corruption is or who might be involved.

TheBlast.com says it had been discovered that between 2008 to 2016 the Chrisley’s had been found to have over-paid stated taxes for four of those years. The Georgia Department of Revenue settled the $2.1 million tax evasion charges after this information had been discovered. They also say the couple underpaid about $77,000 one year and owed nothing for four more years. The case settled with the Chrisley’s paying roughly $150,000.

The couple said they always knew they had never done anything wrong and it would show when the facts came out. In a press release, the couple stated the Department of Revenue kept an open mind and took a look at all the evidence, for which they are glad.

There are still federal charges against Todd and Julie for conspiracy, bank fraud, wire fraud, and tax evasion.