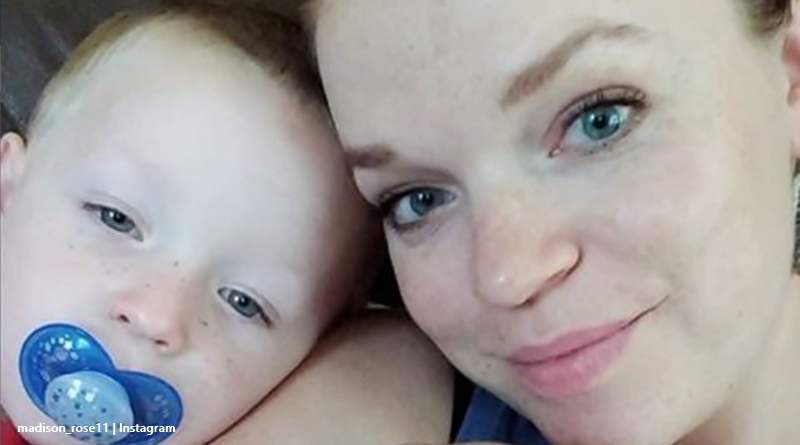 Sister Wives‘ mom Maddie Brown Brush shared the journey of her pregnancy with her fans. Since Evie-K arrived, she’s shared lots of cute pictures of her little family together. But, many people speak out about her parenting as Axel’s seen sucking on his pacifier. Well, it may be well-meaning, but Maddie’s had enough of unwanted advice and she lost it with fans who keep messaging and commenting about it. And, it turns out she’s got it under control with expert advice.

Sister Wives fans mean well with advice on Axel’s pacifier, but Maddie Brown Brush is over it

Most fans who comment on the fact that Axel uses a pacifier mean well. Others get downright snippy about it. On a post that Maddie shared this weekend, Axel looked so cute as they celebrated pumpkin season. But one follower got quite worked up about Axel sucking on his pacifier. Other comments come in from those who offered advice. But, believe it or not, Maddie already got expert advice. She’s so over it, that she considers just making her life much more private.

Taking to her Instagram on Sunday, The young Sister Wives mom shared a photo of her and Axel. And, yes, once again he sucked on his pacifier. Maddie gave critics what-for, noting, “It’s not something I [should] be stressing about during this transition time for our family…” And, that information came from a doctor. It turns out Axel was already weaned off it before Evie-K arrived in his world. So, the little guy regressed a bit.

Axel, the pacifier, and the real story

Being a part of the Sister Wives show attracts a lot of fans who care about Maddie. But, their advice is not always wanted. Actually, the whole family, at one stage or another, does ask for advice (with the exception of Kody). But, when they don’t ask for it, maybe zealous fans should hold their tongues. Maddie explained, “Adding all the stress of your opinions about my child paci does not help and it makes me want to snap back with so much worse than I do and stop showing my life.”

What happened with Axel and his pacifier? Well, Maddie said, “Axel was weaned from his paci before Evie was born. 100%. Its something you can actually see the evolution of on my feed and story archives. When she was born it was the ONE THING he regressed on!” In fact, it concerned her so much that she talked to teachers and doctors for expert advice. And, she talked to her own mom about it. As Maddie says, the unwanted advice really is not helping her. Actually, it’s stressing her even more as she tries to cope with the new family dynamic.

Axel's paci is a hot topic and I receive countless PM's, comments and all of it. People are just trying to be helpful, I get that. Its not helpful though, it makes me feel worse because he was weened at one point. Its something I set up evaluations for, talk to his teachers about, talk to his doctors about because I get so much flack on here it stresses me out that much. . Axel was weened from his paci before Evie was born. 100%. Its something you can actually see the evolution of on my feed and story archives. When she was born it was the ONE THING he regressed on! . Trust me, I did everything to fight it. I took this picture to send to my mom, that we were finally done fighting, after Axel walked around for 3 hours crying till he threw up. We both had melted downs, my house was DESTROYED from him looking for it (because he knows where we hide it) and all the other things you can imagine. After that I talked to his pediatrician (again), the medical professional who ACTUALLY KNOWS AXEL AND WHERE AXEL IS AT IN HIS LIFE. His Doctor said its not something I shouldn't be stressing about during this transition time for our family. Its something we are going to start slowly with when things are a little less fresh. . He doesn't have it at school, he's as verbal as they expect, he is learning and there are no serious red flags. If there was and he still had it in and the people in his life said it was OK, guess what, he would still have it! . Our transition from 1-2 has kicked my a**. I know it does so many other moms as well! I hear it! Adding all the stress of your opinions about my child paci does not help and it makes me want to snap back with so much worse than I do and stop showing my life. . I KNOW I am not the only mom who receives advice that is only meant to help but it ends up not being helpful at all. We as moms have enough guilt. Chances are, what you are about to say, has already been said to them 10000x by someone else just coming from a loving place as well. Unless the advice is asked for, just be supportive of the decisions being made. Its really that simple I promise. We are all trying out best here! 💚💚💚

Maddie says that Axel went crazy for his pacifier after Evie-K was born. He got so upset, he had a total meltdown. The Sister Wives star explained, “Axel walked around for 3 hours crying till he threw up. We both had melted downs, my house was DESTROYED from him looking for it.” And, that’s when she “spoke to his pediatrician.” Maddie says that fans should note that the doctor “knows Axel and where he’s at in his life.”

So, it looks like fans should maybe back off a bit. After all, they don’t know every facet of Maddie Brown Brush’s life. It would be a great pity for everyone if Maddie decided to keep her kids off her social media posts, after all. What do you think? Do you think that advice that’s not asked for can stress out new moms? Sound off your thoughts in the comments below.