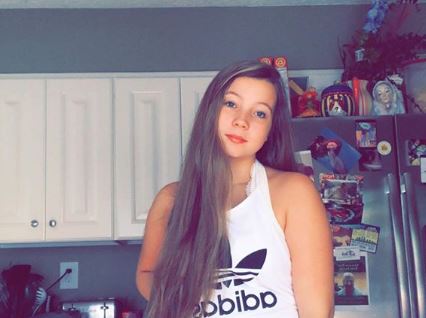 While going into labor isn’t something anyone can predict, 16-year-old Hailey Tomlinson endured an especially awkward situation.

An exclusive sneak preview from tomorrow’s episode of the TLC series reveals Hailey and Matthew were in bed together when her water broke. Making things even more uneasy, the duo were being intimate with each other at the time.

Speaking to the camera, Hailey Tomlinson explained that being 36-weeks pregnant did not stop her and Matthew from being intimate with each other.

“I really wanna be with him, and I did miss him,” She said. “I just felt stuff coming out, and I pulled my pants down and just water starting gushin’.”

Unexpected star Matthew will also carry the awkward situation with him.

According to Pop Culture, Matthew remembers the “puddle of water” on the bed. He explained that it was “three inches of water sticking out the bed.”

He recalled springing into action as he rushed off to find Hailey’s mother Tanya. Her mother also recalled the insane amount of water on the bed. Initially, Hailey’s mother didn’t believe the duo were serious. According to Hailey, her mom came into the room and thought the lovebirds were messing with her.

“I was like, ‘Mom, this is not a joke. My water broke.’ And she started freaking out.”

Hailey also got candid about how she felt as they headed to the hospital for the birth of her daughter.

According to the teenager, both her mother and boyfriend were excited. She, however, was afraid. Like most expectant moms, she was afraid of how it would feel when the baby comes out.

Ultimately, however, Hailey agreed everything she endured was worth it. She wouldn’t change anything for the feeling she had when they placed her daughter Kinsley on her chest.

“I just started crying and so did Matthew. You really can’t explain the love you have for a child. It’s not like you loving your boyfriend or you loving your parent. I didn’t think it was ever possible to love someone like that,” she added.

“Now that she’s truly here, it really kicks in, like I’m mad in love. I can’t keep my eyes off of her. There’s no love like it. There’s just not.” Matthew concluded.

Do you have a crazy story involving going into labor? How do you feel after learning about Hailey’s? Sound off in the comments down below. Stick with us for the latest Unexpected related news.

Unexpected airs on Sunday nights at 10 p.m. ET on TLC.