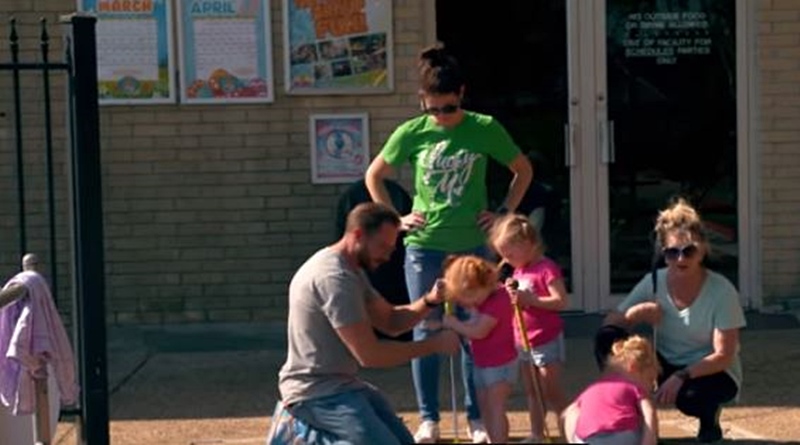 OutDaughtered returns tonight to TLC,  October 1. From the preview, it looks like the quints and Blayke bring a bundle of Busby energy to our screens. It’s everybody’s birthday. As fans of the TLC show know, Blayke and the quints are so close together, that they often share one big day of celebrations. This year, hoping to burn up some energy, they hop in the van and go out for some mini-golf. Plus, if you want a moment of ultra-cuteness, there is a clip of the quints trying to say “squirrel.”

The premiere for the new season brings us the birthdays for the girls. And, the girls are full of energy, so Danielle Busby calls it a “fournado” year. The quints turn four years old, while Blayke turns eight. Excited to go on an outing, the girls scramble into the van and hit the road. Adam and Danielle try and get the girls out and about to burn off five little powerhouses of energy. Mind you, Blayke might find it a bit hard to keep up with her energetic sisters, as she takes a bit of a nap in the van when they get to the mini-golf game.

On the way there, why not have a crossover of fun events? Little Hazel decided to be the Easter Bunny, which makes some of the quints cry. Scary Easter Bunny! The girls jump out the van and yell at sister Blayke to wake up, then make a beeline across the (fortunately) empty street, which gives mom Danielle, a moment of anxiety. OutDaughtered dad Adam says, “The girls have become a lot more competitive over the last few months.”

Armed with gold clubs, the six bundles of Busby energy hit the greens

Danielle explains that they look for “more sporty activities to channel that energy.” The family gets joined by Mimi, (Danielle’s mom), Uncle Dale,  Aunt Crystal, and their kids Kenzie and Bronson. After a bit of instruction, the girls get into it, but Hazel really could put a bit more oomph in her strokes. But, everyone cheers her when she finally gets the ball in the hole. It’s the first time the quints ever played mini-golf, and they certainly seem to enjoy it.

Daniele and Adam talk to the cameras a bit more, saying “it’s been a very fast-paced year.” For Adam, it feels like the OutDaughtered home’s experienced a “literal tornado.” Fans of the show commented on the preview over on YouTube. One of them noted that watching these girls “reminds me of Jack Jack multiplying in the Incredibles 2.” Another fan commented, “God bless y’all, I had twin sisters plus me back in the 80s… I don’t know how you deal with that × 6.”

Short clip of the kids trying to say ‘Squirrel’

Over on Instagram, the @OutDaughtered account dropped a short but super-cute clip of the girls trying to say “squirrel.” Very much the leader, clever Rileys says, ” Mama I saw a squirrel.” Of course, the others all start to try and say the same word. Various versions come out. One sounds like “skirrrrrrl,” another, a “square,” and another is definitely a “squail.”

Trying to have a conversation before coffee Monday morning like…. #OutDaughtered

It’s so much fun and way too cute, fans agree. What do you think? Don’t forget to tune in on October 1 to see the premiere of five bundles of Busby energy.