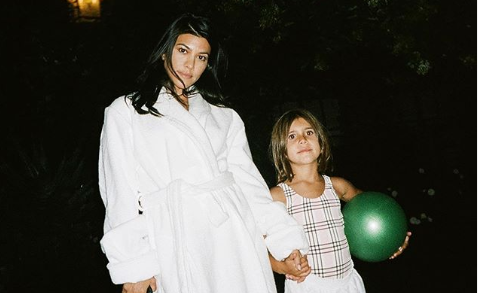 The fight Scott Disick and Corey Gamble had over his daughter with Kourtney Kardashian makes a little more sense now. Without the reason behind it, the clip made it look like Corey randomly offered some advice on discipline. That’s not the case.

According to US Weekly, the Poosh owner told her family they didn’t have a nanny anymore because P scratched her in the face. Kourtney said her daughter was upset and she did it when the nanny was putting her in the car.

Kourtney Kardashian went on to explain the concerns she had about her daughter’s behavior. She said, “P can be out of control. I think she almost, like, blacks out and does these wild things.”

Kim Kardashian West told Kourtney she should reach out to the nanny and apologize. She told her North tried to bite their nanny and told her she could go home. She said she didn’t want a nanny. Kim said she replied that North couldn’t fire the nanny.

Kim recently said they didn’t have any help at them moment because Kanye was on a no help kick. She said she told him he could try getting the kids ready in the morning and he almost gets it.

Kris told her the situation is a lot more serious than Kourtney thinks. She reminded her daughter she had six kids and told her,“not once in my entire life did anyone ever have a complaint like this. We need to take care if this before it gets too far out of control.”

Kourtney Kardashian said she would slap her nannies in the face. The reality star disagreed that she was a perfect angel to her nannies. She said there wasn’t anything she could take away from Penelope that she cares about. She told them Mason cared if she took things, P did not.

This is the point Corey Gamble said Penelope needed a spanking which led to the shouting match. He told them, “If P scratched me, I’d whoop her a**.”

Corey was suggesting an option based on what he did. It enraged Scott who told him, “you don’t talk about a kid like that.” Kourtney Kardashian and Scott have been vocal about not spanking their children. Fans will be looking to see if P has anymore out of control outbursts and if the nanny comes back.