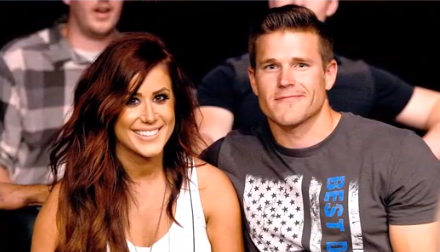 Adam Lind, the father of Chelsea Houska’s daughter Aubree, hasn’t been seen on Teen Mom 2, in over two years. For the past two years, he’s been dealing with some legal issues, including a domestic violence arrest. He also tested positive for meth during a custody battle for Aubree. But it seems as though the reformed bad boy, now 30-years-old has made a comeback for season nine. Chelsea, 28, doesn’t seem too pleased with the situation in the upcoming episode.

A clip recently revealed Adam smiling and hugging Aubree after a little league game, Chelsea doesn’t appear any less than pissed. She’s seen with her one-year-old daughter, Layne and her husband, Cole DeBoer on the opposite side of the baseball field. Chelsea complained, “Oh my God I’m uncomfortable.” Adam at least appears like he’s trying to be an attentive father and seem as if he has it all together. During last season, Chelsea changed Aubree’s last name to Lind-DeBoer after receiving full custody in January of last year.

On Twitter, fans showed some mixed reactions to the video. A fan commented, “WTH is wrong with Chelsea?! She knows Adam exists! She should be thrilled his a** showed up! Based on the clip, she looks like a hung up ex! Why does she feel uncomfortable?! She looks great! Has a GREAT man! Supposedly has a great life!” Yet another said, ” Holy cow is that Adam? Hope he is getting help and clean. But I don’t trust it.”

Little date night with this hunk of meat 🤤

Some fans questioned if Adam was even allowed to be seeing Aubree at the game, “Thought she couldn’t see Adam unless it was at the visitation center?” A fan responded, “He and his mom probably showed up. It’s not like Chelsea Houska would ever call the police she’ll just complain about how it’s making her have anxiety.”

Without Jenelle Evans on the show, it seems Adam might be returning in an attempt to bring over some drama to Teen Mom 2, according to HollywoodLife. They let her go in May, after some drama with her husband David Eason who shot and killed her dog Nugget. She lost custody of her kids temporarily while CPS investigated the safety of their home. Eason had already been fired by MTV after making transphobic and homophobic remarks on Twitter.

It is going to be interesting to see how this all goes down on Teen Mom 2.