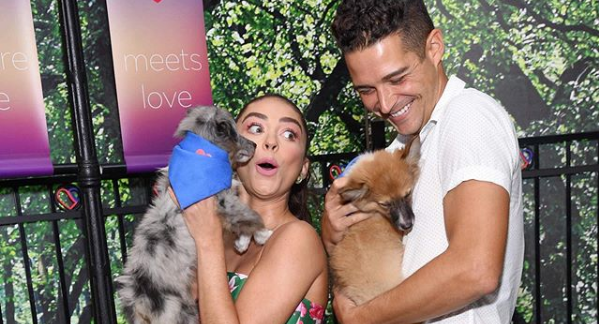 Well Adams talked to Women’s Health about the reason Caelynn Miller-Keyes picked Dean Unglert over Connor Saeli. He said the Bachelor in Paradise star had an easy choice. Despite the fact she spent a week with Connor Saeli getting to know him she was quick to go with Dean when he returned.

Wells Adams has been there and done that, so he’s the perfect person to give a behind the scenes look at what Caelynn Miller-Keyes was thinking.

The beginning of Paradise was a bit touch and go for Keyes having spent a lot of time with Blake Hortsmann. When Dean arrived she changed her tune pretty quickly. According to Heavy, Dean left Caelynn after he dumped her. Then, she started hanging out with Connor. Things were looking good for them at first.

A pic that someone took of us while someone else was taking a picture of us. 🤯 Yes I know my shirt is ironic. Also, that’s a grocery bag, not a purse. Not that there’s anything wrong with that.

Why Does Wells Adams Say Caelynn Chose Dean Over Connor?

Wells Adams said people forget how much more time she spent with Dean before he left than she spent with Connor. Even though they were on screen a lot it was little more than a week. Despite the joke that Caelynn would just be hanging out in Dean’s van, Wells Adams says that joke is, “low hanging fruit.”

Are Caelynn and Dean Enjoying Their Time After Leaving Paradise

Dean shared a picture of them in the van on the beach with the caption, “sorry we had to leave BIP early, the vantasy suite waits for no one.” Caelynn also posted on her Instagram she wants Dean to bring back the mustache.

Wells Adams may be right about her making the best choice for her. On his podcast, Dean said they took a huge step by getting a cell phone plan together. Caelynn agreed on Instagram saying she, “agreed to at least 2 years with this guy.”

About his van, Wells Adams finished the interview saying, “Yes, he has a Sprinter van, but he drives to Crete for like yacht week. His wanderlust is not just limited to going to see the biggest ball of twine in Utah.” These two have many more adventures to come and fans will be trained on their Instagram accounts watching every minute.

Update On Nicole Lewis From ‘My 600-lb Life,’ Where Is She Now?
‘The Blended Bunch’: Aimee Shemwell Was Pregnant When She Tragically Died
Where Do Tammy & Amy Slaton Buy Their Cute Clothing From?
‘OutDaughtered’ Quints Have Fun With Uncle Dale, But Where Is Riley?
TLC: ‘Return to Amish’ Season 6 Release Date, Trailer, Cast And More