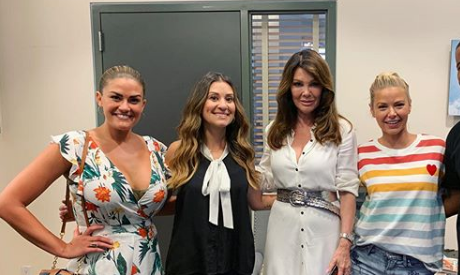 Lisa Vanderpump isn’t trying to pretend it hasn’t been a tough year. She left a show she’d been on for nine seasons and lost friends. Thanking her fans for wishing her a happy 59th birthday, she reflected on the good and the bad.  She did say while it had been a difficult year both personally and professionally, she had some bright spots.

Her mother passed away and it hit her hard among a time she was dealing with negativity from RHOBH. She told Us Weekly it was difficult to film the show after the death of her brother, which occurred the year before.

The SUR owner said, “I manage to try to pull myself together with grief counseling and antidepressants.” She added, she’d never taken them or had therapy in her life, but thinks it’s put her in a much better place.

Lisa Vanderpump Did Have Some Great Things Happen This Year

Lisa Vanderpump is lucky because despite leaving Beverly Hills, she has another show. Some former housewives aren’t that lucky. She can fallback on Vanderpump Rules in addition to her successful restaurants. She has an excellent relationship with her business partners and with her staff. The Vanderpump queen opened TomTom and a new cocktail garden in Vegas sparking rumors of a spin-off.

Jax Taylor supports Lisa Vanderpump and her decision to leave the show. According to Hollywood Life he said, they’re close and sometimes she comes to him for advice.

Jax Taylor Is Glad His Boss Left The Real Housewives

The SUR bartender said, “I think leaving ‘Housewives’ was the best decision, considering what she’s gone through with her family. She’s had two big losses, her brother and her mother. That’s a lot to deal with.”

He continued saying, dealing with the drama of the women was a lot. After the losses life meant it was time to step back and reassess. The model said Lisa leaving had to happen because stress kills. Jax said now she seems calmer and less stressed. Jax said that while he loves being on the show they are very stressful. He said you have people coming for you and you can lose sleep over it. He said he’ll support her if she goes back but she needed a break.