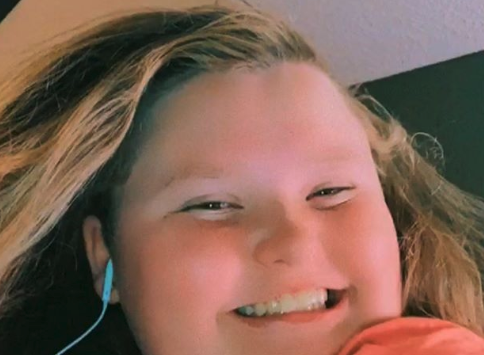 Here Comes Honey Boo Boo star, Alana Thompson, has had quite the year of ups and downs. Alana was caught pretending to do cocaine while her mom faces drug charges. Clearly, her mom didn’t set a great example.

Honey Boo Boo gets in trouble

According to Showbiz CheatSheet, she was actually pretending to do drugs on her Instagram story. To be more specific, she was mimicking doing cocaine. Alana’s mom has a pretty big history of drug use. This makes the situation with Honey Boo Boo pretty serious.

Since her mom is currently undergoing some drug charges after checking herself out of rehab, Alana has moved in with her 19-year-old older sister, Pumpkin.

Alana got in pretty big trouble with her sister though after pretending to do the drugs. Alana went as far as to actually pick up a plastic knife to pretend to prepare the drugs. Afterward, she “inhaled.” Definitely not something a young girl should be doing, and Pumpkin put an end to it right away.

“Alana quit f**king doing … don’t even f**king mimic that on f**king live! Acting like a f**king idiot on live, that’s why you don’t go live on your f–king Instagram,” Pumpkin yelled at her sister.

Most importantly, there is one person looking out for Alana as she grows up. Hopefully, she learns a lot from this experience.

The whole situation with Mama June is pretty sad. All of her children ultimately want her to get better. They even had an intervention for the reality TV star on the final episode of Mama June: From Not to Hot.

It’s a pretty heartbreaking situation for the children involved.

Apparently, Mama June checked herself out of rehab just 12 hours later. Not a great start to the journey of healing. Furthermore, she was arrested for possession of drug paraphernalia and controlled substance two days later. Clearly, the intervention didn’t do a lot for Mama June.

Let us know your thoughts in the comments.

‘Pig Royalty’ – Renewed Or Cancelled On Discovery +?
‘Bringing Up Bates’ Preview: The Family Is In For A Huge Shock
‘Gordon Ramsay: Uncharted’ Exclusive Interview with Maine Chef Melissa Kelly
Jinger Duggar Proves She’s Not Like The Rest Of Her Family
Chris Harrison Leaves Bachelor Nation: Rachel Lindsay Speaks Out