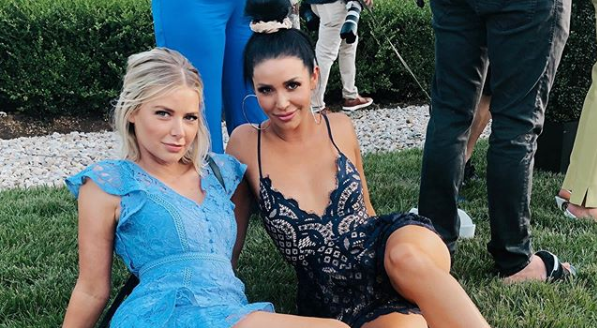 Robby Hayes who? Scheana Shay was hanging out with another guy from Bachelor nation and TMZ captured the whole date. Lately Scheana said she wasn’t looking for anything serious when it came to dating. She said her and Robby just got drunk and made out, that was their thing. Scheana said she could get back with any of her exes at any minute.

But now she’s gone out with DeMario Jackson from Bachelor in Paradise on a trip to the happiest place on Earth. The source reported the two reality stars were showing a lot of PDA at Disney California Adventure in Anaheim they weren’t shy about touching each other in public. The scandalous SUR waitress and Demario were hanging out with a few other people from Vanderpump Rules as they rode the rides. According to Inquisitr, the friends with the couple were Jesse Montana, Raquel Leviss, and James Kennedy.

James recently liked Scheana Shay’s post on Instagram where she captioned a picture of her and Danica Dow at a Chargers game, “nice butt.” James Kennedy immediately said, “oh hey girls.” Fans thought he was flirting according to Hollywood Life. They think he should watch it because of the cheating rumors against him in the past. Now that he’s been out with his lady and Scheana is with a different guy maybe they can put those rumors to rest.

What Were Scheana Shay And DeMario Jackson Doing Out Together?

Sources said Demario wrapped his arms around Scheana Shay several times throughout their day together. Scheana was down for it and all smiles with turquoise mouse ears and her signature large shades.

Some fans think it’s possible, they’re just putting on a show. There was a time when DeMario took Corinne Olympios to Disneyland. Strangely enough, she also wore blue mouse ears two years ago while they rode rides together. This was after she’d basically said he violated her. They seemed to make up after the Disney trip and told TMZ they were just friends.

Demario had a reputation when he came to Bachelor in Paradise. On Rachel Lindsay’s Bachelorette season and was sent home for having a girlfriend. The scandal with Olympios on BIP caused production to be shut down. Needless to say, these are two big personalities coming together whether it’s for publicity or not. Since Scheana Shay has recently said she’s not looking for anything serious it’s possible this is another one of her friends with benefits.