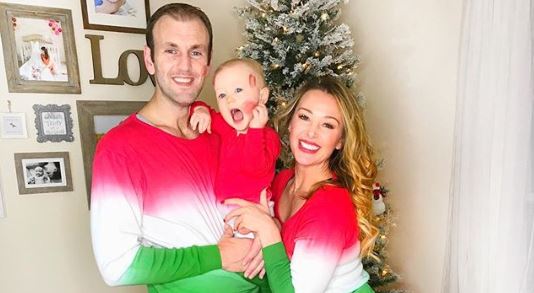 Married at First Sight is trying its own experiment this late in Season 9.  Premiering on the August 21 episode, Couples Couch gathered together some of the favorites from success stories of the arranged marriage effort.  First season bride, Jamie Otis, and her hubby, Doug Hehner, last season matches, Keith Dewar and Kristine Killingsworth, Danielle Bergman and Bobby Dodd from Season 7, and Season 5’s Anthony D’Amico and Ashley Petta all acted as true armchair coaches.  The seasoned couples watched the “Secrets of the Past” episode from the current Married at First Sight and provided their own perspectives.

Jamie Thompson and Elizabeth Bice couldn’t be sweeter when things are good, but when disputes arise, this high-emotion couple just cannot get out of attack mode.  All of the coaching couples were tough on Jamie for telling Elizabeth to “shut up and listen” at the NASCAR driving experience.  Bobby Dodd did interject that Elizabeth “needed to be quiet” because instructions were being given.  How many minutes a day is Elizabeth ever quiet?

Once again, the hurt feelings and arrows flung during the driving adventure spillover to home, toxic language, and flipping furniture.   Jamie expects “I’m sorry,” and Elizabeth feels shamed and rejected in front of their counterparts.  The coffee table takes a big hit.  Anthony and Bobby both feel good that furniture survives.  Anthony couldn’t get over Beth in a blanket.

Jamie and Beth of Married at First Sight almost have a perfect day after Dr. Viviana Coles does an emergency intervention, again counseling how to express feelings without four-letter words and stopping the emotional bleeding.   They almost share a perfect day.  At the sight of her childhood home, Beth breaks down and becomes more vulnerable than ever.  Nothing is there of the trailer she remembers, or her grandmother’s next-door.  She relates how her family struggled to meet the basic needs of their children, and how empty it feels to say nothing of the past.  The coaching couples love this moment and see their potential.  They cheer as Jamie says he doesn’t mind some runny nose run-over on his face.

On the way home, sadly, things turned negative again.  Both parties turn to the past, and in seconds, things blow up on the car ride home.  A unanimous “NO” roars from the couches.  Better than giving sideline advice, another strategy would be to let one of the Married at First Sight veteran pairs sit in on a Beth and Jamie squabble, and interject with proper communication.  The only caveat is that SWAT gear would be necessary.

Calling all MAFS fans! ✨We get to see what our previous MAFS couples are thinking about this season! ❤️Tune in to #MarriedAtFirstSight: Couples Couch tonight at 8/7c. pic.twitter.com/zZoJYycT11

Keith Manley told his bride that he had been looking forward to their time together snuggling in bed all day.  She was touched, but when he asked if she had thought of a secret to share, it was clear that he wanted something of substance.  The exercise suggested by Dr. Coles was intended to drive couples beyond surface issues to more personal ones, but Iris did not get that memo.

She relates a story of swallowing a quarter on a school bus ride.  It’s no wonder that Keith and every couple watching was “confused” by what she conjured to divulge.  The fact that this school days’ story is all that she was willing to share does point to issues of maturity, even for such an accomplished woman.  It was very disappointing. Keith told his mother “I don’t know,” when she asked if Iris was the one to make her son happy.  They are making strides with sensuality but more growth is needed, with time running short.

Couples Couch is not even a veiled effort to compete with TLC’s Pillow Talk, which follows 90 Day Fiancé.  If Lifetime wants to reap similar success, the commentary needs to be more free-flowing and spontaneous, even with more censor bleeps.  If Pastor Cal Roberson doesn’t hold back when counseling couples on Married at First Sight, then neither should these coaches.

The initial Couples Couch was a snooze rather than a sensation, but there are more climactic Married at First Sight installments to come.   There’s still time to liven things up!

THAT’S A WRAP! ‘LPBW’ Filming Complete: Is The TLC Series Finished?
WOW!! Looks Like Whitney Way Thore Has Lost Some Major Pounds
‘Love After Lockup’ Spoilers: Why Was Courtney Arrested?
‘Autopsy: The Last Hours Of Bob Crane’: Release Date, How To Watch
‘Siesta Key’ Season 4, Episode 5 Not On This Week & Here’s Why