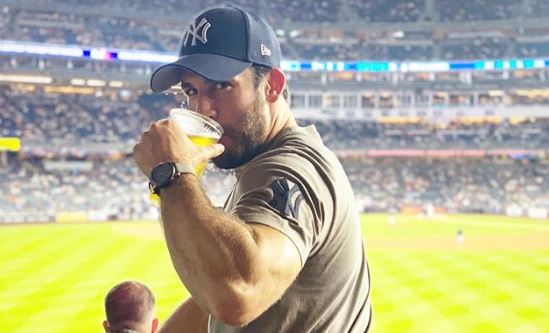 As TV Shows Ace previously reported, Derek Peth impressed fans with how maturely he handled Demi ending things with him for her girlfriend Kristian Haggerty. Since their breakup episode aired, Bachelor Nation has been clamoring for Derek to be the next Bachelor.

A source close to the situation tells ET that there has been some chatter among the producers about Derek as Bachelor. However, the New Yorker hasn’t gotten an official offer. Peter the Pilot and Mike Johnson are still also in the running.

As for whether Derek would sign on to become Bachelor, ET’s source says, “He’s in a good place. He’s grown a lot as a person during his time on the shows. He’s confident in who he is, so he’s open to the idea.”

If Derek were to leave Paradise immediately, it’d be easy to envision him riding the wave of public goodwill into a starring role next year – but he’s not home free yet. The season preview at the end of episode one showed teasers of Derek involved in what seems to be a major storyline with John Paul Jones (JPJ).

Per the preview, Derek and JPJ get into a confrontation over Tayshia. JPJ makes some serious accusations against Derek. If they prove to be true, it could definitely affect his Bachelor candidacy.

According to USA Today’s FTW,

“After six episodes of what can definitely be described as a “Bachelor edit” for Derek, it’s almost unthinkable that Derek could become a villain on the show, but John Paul Jones’ ‘reputation is impeccable,’ as he reminds Derek a few seconds later in the preview.

There’s a growing conspiracy theory among some Bachelor fans on Twitter that the show has set up Derek to become the next Bachelor over Mike, who entered Paradise as the favorite to land the role. It has been speculated that Demi misrepresented her relationship with her girlfriend – a connection she called “casual” initially, yet quickly said “I love you” on the night Kristian arrived – and that Derek could have been involved in the storyline in order to help his chances as the next Bachelor.”

Kentucky TV News anchor Amber Smith tweeted, “I may just be creating conspiracy theories here, but does anyone else feel like they are setting Derek up to maybe be the next Bachelor? #bacheloreinparadise”

According to former Bachelorette contestant James Taylor, Derek knew what he was getting into. He posted on Twitter: “Lot of us knew Demi’s plan a long time ago cuz she told us. ABC felt pressure for inclusivity on #bachelorinparadise & Derek’s in on it. Don’t know if she knew that he knew.
ABC: “You’re great at on-command crying. Can we pay you to get more famous & get broken up with?”

Derek Peth hasn’t confirmed that this is true at all, though.

Does Derek Still Have Anger Issues or Has He Matured & Mellowed?

With the #DerekforBachelor campaign in full force, there are some who do not think this is a good idea. The administrator of The Bachelor/Bachelorette/Bachelor In Paradise Spoilers facebook group, posted the scene where Derek and Taylor had a huge fight when they appeared on Paradise as a couple. The scene ends before Derek Peth was seen throwing things as he left. He may have thrown a drink and also broke a bottle. Supposedly, one of the reasons Taylor broke it off with Derek was because of his temper and control issues. In addition, Derek also got angry with JoJo when she sent him home during The Bachelorette.

“I’m kind shocked that peeps want him as the next Bachelor. He’s been horrible in past shows. His emotions are all over the place. When he was on The Bachelorette he was an emotional wreck!!!”

Stay tuned for the dramatic confrontation between Derek and JPJ this week on Bachelor in Paradise. As we have experienced, things in Bachelor Nation move super fast and are constantly changing. One minute you’re adored and the next second you are yesterday’s overripe, stale trash. Maybe that’s why Mike is lying low on Paradise and Peter is completely out of the spotlight at the moment.

Don’t miss new episodes of Bachelor in Paradise on Monday and Tuesday on ABC.