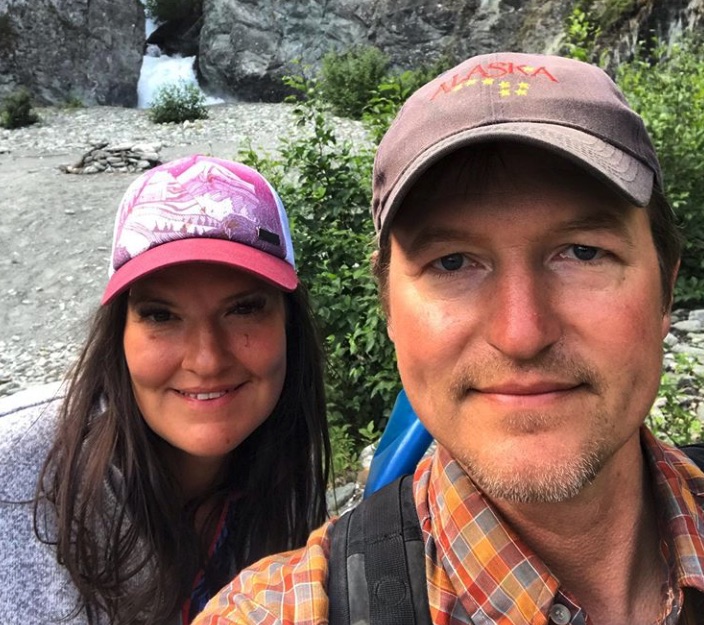 Jane Kilcher just posted that Alaska the Last Frontier completed filming on Friday. When should we expect Season 9 to start on Discovery?

When you have a lot of fun on a shoot and you make the cast and crew do a group photo ! See you on the Telly soon!!!!

Alaska: The Last Frontier Season 9 In The Can

Jane Kilcher has posted on Facebook that they just completed filming Season 9 of Alaska: The Last Frontier. Calling it one of her favorite seasons ever, it promises more stories of their life on the Alaskan homestead. She has not posted many photos on social media, but she has indicated she is taking a special fishing trip to a beautiful spot. That should be wonderful!

Filming of the Discovery show starts sometime in February and ends in August. That is about seven months of camera crews following the various Kilcher family members around the homestead and beyond.

The homestead was started by Yule Kilcher and his bride Ruth in the late 1930s. The two left Switzerland and made their way to Alaska. They chose to live their life in Homer, near the shores of Kachemak Bay. They raised their family in a one room house. They farmed and fished for salmon. The Kilcher family still lives on the hundreds of acres that Yule Kilcher cultivated.

When Does Alaska: The Last Frontier Season 9 Start?

Below Jane Kilcher’s Facebook post, a fan asked when Season 9 starts. Jane Kilcher responded: “I think the first Sunday in October we are airing our new season. It’s a fun one!” Based on Jane Kilcher’s reply, this would mean Alaska: The Last Frontier would start on October 6 on Discovery.

As for the amount of episodes this season, fans will need to wait. Last season, there were only 17 episodes. Most of the previous seasons included 20 episodes. So, it could be safely assumed that there will be 17-20 episodes for Alaska: The Last Frontier Season 9.

Happy Father’s Day to all the dad’s out there. Your role is vital and important and your children get so much from you that no one else can give. When they bond with you, it sets up how they will bond with all men. by just being there they know they can depend on men and the love they provide. And all the other things you do from playing to supporting the family in all the ways you do are innumerable in how they show your child how to be in the world. I salute all fathers. And I salute all the single fathers who might be out there. Being a single parent is hard, and I know some single dads who have stepped up to be everything for their kids. And to my dad! Dad, you stepped up after the divorce and raised me and the boys and I am forever grateful for that act alone. I learned to be creative from you. I learned writing songs wasn’t hard- it was just what people did. And that turned into a living for me that has been beyond my wildest dreams. You taught me what porcupines sound like climbing trees, how to identify tracks, how to listen for bears, how to ride, and how to care for the land. You taught me to work hard. You taught me to be curious and open to other ways of thinking and to embrace other cultures. And the most extraordinary thing is that you taught me people do change. You have given me and kase the best gift any dad can – a sober , loving gentle man who has embraced his past and transmuted all your painful experiences into beauty. That’s a feat few tackle – and you did so with a tenacity that is heroic. Your talent with words, your book, your many albums, your basket weaving and your endless curiosity are just part of the legacy Kase will get to inherit. I’m so lucky kase gets to know you and learn from you. We are lucky and grateful and blessed beyond measure. Happy Father’s Day! @atzkilcher and happy Father’s Day to @atzlee @shanekilcher @nikoskilcher – you are all amazing fathers !

Is Jewel Is Back For Alaska: The Last Frontier Season 9?

Singer, actress and entrepreneur Jewel Kilcher is indeed returning back to the family homestead for Season 9. She has already posted photos of her son Kase Townes Murray and brother Atz Lee Kilcher, showing off their fishing skills. Ok mother and son were successful, but Uncle Atz Lee cheered on his nephew’s success.

Since Jewel is visiting, how about some music? On August 6, Jewel, Atz, Atz Lee, Nikos, Steve Polz, and Zac Brown all performed in Homer, Alaska. Jane and Charlotte did share some Facebook live video and behind the scenes shots before the show. Since the filming did not wrap until a week after the show, it could easily be expected that there will be some of this concert on the show this season.

Jewel started singing and yodeling as a child. She and her father Atz would perform live. Eventually, Jewel went on her own and wound up living in a car before finding success in the music industry. By returning back to Homer and performing with her family, she has come full circle.

Jewel’s brother Atz Lee also has musical talent. When he was younger, he had left the homestead to pursue a musical career. Turns out, he missed the life he left behind. But thanks to the Discovery show, he can still perform music to appreciative crowds and still live in the homestead with his beloved Jane.

What ‘DWTS’ Star Thinks They Can Win ‘Big Brother?’
Fans Come For Whitney Way Thore Calling Her Manipulative
Rivers Waldrop Gets A Nose Bleed From Tag
Are ’90 Day Fiance’ Star Brandon And His Family Faking Drama To Sell Puppies?
Steven Frend Hankers For An RV Lifestyle