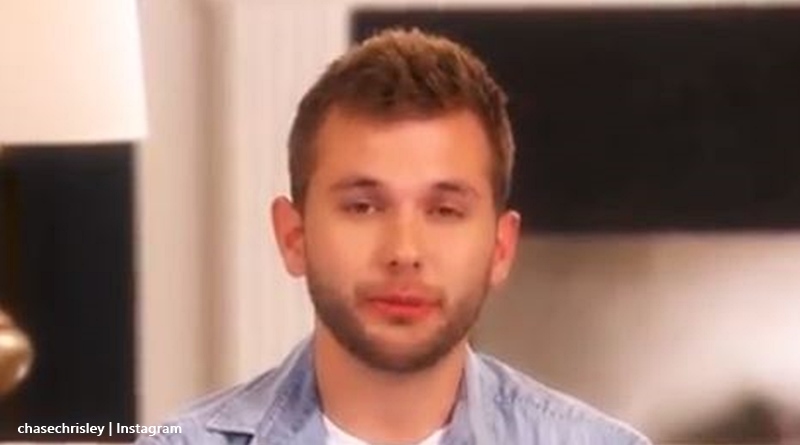 Chase Chrisley, the son of Todd who deals with an indictment for alleged tax evasion, faces some problems of his own. Allegedly, he owes $16,000 in back taxes. The Blast dug around and unearthed documents pertaining to it all. All this comes while Todd Chrisley and Julie face the allegations that arise from an old lawsuit.  They face allegations of tax evasion and fraud, TV Shows Ace reported. We wrote, “The couple was indicted today on tax evasion among other charges…It turns out that their former accountant, Peter Tarantino, is reportedly facing the same charges.”

Chase is the youngest son of Todd. He is well-known to TV viewers of both Chrisley Knows Best and Growing up Chrisley. The current season of Growing up Chrisley premiered in the first week of August. We noted that we saw Chase Chrisley giving a tour of their new home in LA.  People reported that Chase “jokes that Savannah will take up the slack in the kitchen. He pointed out the white Chesterfield sofa: “When Savannah’s not eating her feelings on the couch, Elliot’s probably asleep there or I’m watching a game,” he said.

But now, he really needs to face up to the fact his family’s in trouble, whether innocent or not. Actually, the show mentions Todd’s cautious about him staying out of trouble. In fact, he wants Savannah to keep an eye on him. However, he may already be in trouble  The indictment on Todd places Chase Crisley squarely in the sights of the media at this time. And, it turns out his own alleged problems with taxes now also make the headlines.

In their article, The Bast referred to documents they obtained from the courts. They wrote, “The lien accuses Chase of refusing to pay up on taxes from his income due for the year 2014. The total unpaid tax debt comes to $16,886.64. According to records, the lien has yet to be released or paid off.” Now, the sticky bit emerges. These liens refer to a “Roswell, Georgia home…owned by a company named Quagmire Holdings.” That company’s run by  Peter Tarantino.

Multiple mainstream media reported that former accountant of Todd Chrisley faces the same charges as Todd Chrisley. The Blast noted that “The lien warns Chase that the bill is not paid in full immediately, the IRS can begin the process of seizing his property and assets.” So, for Chase Chrisley, it seems a timely payment needs consideration. After all,  his family’s already facing a crisis with potentially terrible outcomes.

What do you think about Chase Chrisley allegedly owing money for taxes? Do you think this news is not a good look for the family amid  Todd’s tax evasion indictment? Sound off your thoughts in the comments below.

Remember to check back with TV Shows Ace often for more news about Todd and the tax woes of his son Chase Chrisley.

‘The Bold And The Beautiful’ Spoilers: Zoe Has A Shocker In Store
Savannah Chrisley Is Hopeful About Product Launch Next Week
‘Shameless’ Finale: John Wells Explains Why Frank Died Alone
Exclusive: Maria Hinojosa Learns of Noted Spanish Ancestor on ‘Finding Your Roots’ for PBS
Tiffany Espensen Wants A Cute Baby – Lawson Bates Tells Her ‘No’