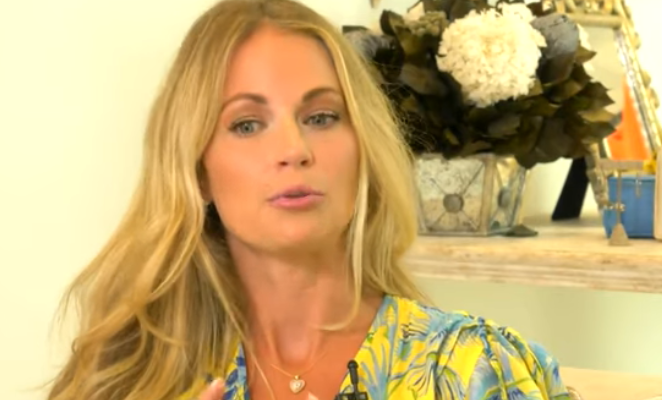 Ashley Jacobs has a history of bizarre statements and behavior. In an un-aired clip from Southern Charm she literally picked up Cameran Eubanks. Eliza Limehouse told Bravo, “In Ashley’s mind, she doesn’t always know what’s going on. It’s Ashley-world.” It’s clear she’s trying really hard when she is chasing after Cameran and Chelsea during a fox hunt that recently aired on Southern Charm.

Both Kathryn Dennis and Danni Baird commented in the after-show about Ashley’s behavior. Kathryn said she came up to everyone and was like smiling and on display. Dennis said it was the weirdest thing. Danni said she didn’t read the room well.

Cameran Eubanks Was Surprised Ashley Picked Her Up And Spun Her

In the clip, Ashley said, “I want to hang out with you. I like you.” Cameron was saying, “baby steps.” Ashley seems to be coming on really aggressive. Maybe without Thomas in the picture, she needs someone else to latch onto, but she actively scares people away by acting erratic.

With Cameran trying to be nice but also trying to get away, Ashley chased her. When  Cameran tried deterring Ashley, she said, “I’m going to pick you up.” She lifted Cameran into the air who was yelling, “help. You’re taking this too far.”

Ashley was saying, “we can be friends, we can be friends.” When she finally put her on the ground again, she just kept asking Cameran Eubanks, why are you so tiny?  Then she was trying to grab Chelsea who ran away from her. In the footage, you hear Chelsea say, “don’t chase me around the pool. That’s weird.”

Why Did Ashley Come To The Fox Hunt In The First Place?

Cameran Eubanks and company were invited to Eliza Limehouses’ for a mock fox hunt. They used a fake scent and released the hounds on it. The hunters then followed on horses while most of the Southern Charm cast road along behind on a large trailer.

Eliza said she wanted peace and Ashley pressed her to get to go to the fox hunt. Danni and Chelsea said Eliza is just a nice person and she doesn’t want to leave anyone out. Eliza said she didn’t want to not be friends with Ashley because of something that happened while she was still in college. Eliza will probably continue to invite Jacobs to events so she doesn’t leave her out. It will be interesting to see if she tries to manhandle Cameran Eubanks again.