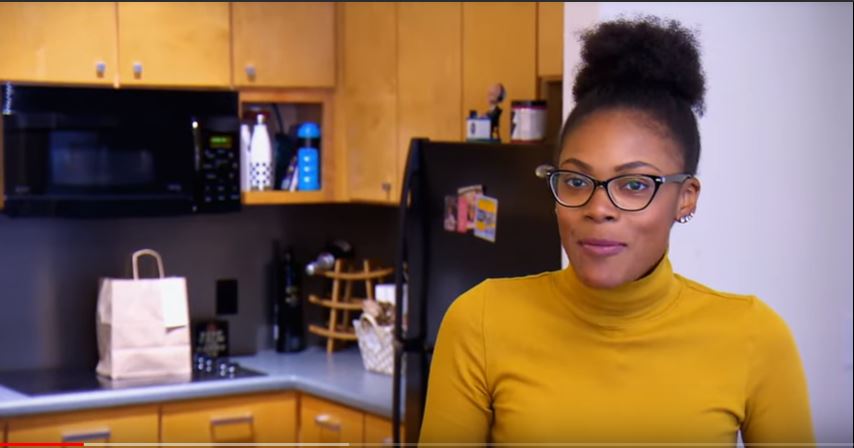 The honeymoons are over for the four Married at First Sight couples.  Now, Jamie and Elizabeth, Greg and Deonna, Matt and Amber, and Keith and Iris have to navigate life day-to-day as a cohesive unit.  For Season 9, the Married at First Sight team opted to put each couple in the same complex of their “neutral territory” apartments.  Each one appears unique and lovely. Before the couples make that move, they share one night together in either the husband or the wife’s abode. This is what went down on the Wednesday night episode this week.

It doesn’t take long before one bride is finding out “interesting” information from her investigation of every nook and cranny. Defining spaces and making friends with furry roommates is all part of the equation of cohabitation, too.  Pastor Calvin Roberson pays a visit to each couple and already has homework assignments and some surprising revelations.  Real-life never promises to be easy, and it’s really true for these pairs managing life with newfound passion but little personal history.

Iris and Keith spend their first night back in North Carolina at his place.  Pastor Cal points out that they have great potential for a wonderful future.  He urges them not to make a big deal of “the elephant in the room,” iris’ virginity, but also, not to block the natural flow of physical connection.  Keith affirms that he is willing to wait, but Iris doesn’t wait for one nanosecond before sweeping every drawer and cabinet speedier than a police SWAT team.  She opens everything that can be opened and quickly finds something disturbing—a completely empty box of condoms.

Keith explains that he packed some protection for their honeymoon.   He leads her to three stored in his backpack.  At first, she bristles.  “You didn’t know what kind of girl you had?” she questions.  The truth is, he had no way of fully knowing until his mother broke the news and his wife further elaborated on the reasons she protected her purity.  After a heart-to-heart, Iris reveals that all she really wanted was for him to use those discreet items only for her. “We got three,” Keith reminds and they share a touching embrace.  “Those lips belong to me,” declares the bride.

Keith and Iris seem to have the fewest problems in their new place and wake up giving one another the same sweet back-and-forth before breakfast talk as ever.  The other couples have some tweaking to do.

Elizabeth seemed buoyant with love in this week’s July 17 Married at First Sight Unfiltered.  Dr. Viviana Coles has no issue with this couple already declaring that they were in love, but did caution that their feelings were not yet tested.  There is not “a deep-rooted love” but certainly seems to be a love in bloom that they can build on.

Jamie’s Married at First Sight nickname is “Mr. Picky,” and Elizabeth was off-put by the perfect cleanliness and order of her mate’s dwelling.  “So no glassware in the new house?” he inquires after she informs him that she breaks a lot of things.

Jamie seems to thrive on Elizabeth’s quirky, New Age kind of vibe. He plays along while she anoints their new home, and every inch of her husband, with Sage.  Jamie also gets a full introduction to her three dogs, all with a very Velcro kind of nature.  The two Chihuahuas and one shepherd mix seem to be adjusting to family life, and it’s sweet to see the little ones already sitting on Jamie’s lap when Pastor Cal calls.  Roberson counsels this couple to practice totally vulnerable “naked moments” of honesty.

Of course, Jamie and Elizabeth love the sound of this exercise, but can they both allow themselves to be that open and honest? Elizabeth asks her new husband in a “naked moment” how he felt about her dogs.  “It’s a lot,” the cat-owning spouse responds.  Still, these two seem committed to making it work, so let’s hope that they will.

The Married at First Sight experts were unanimous in their belief that Matt and Amber had the right stuff for a happy marriage.  They seem excited as they prepare for real married life together.  What becomes abundantly clear to Amber, however, is how attached her husband is to the come-and-go lifestyle of his international basketball career.  Matt has described the tremendous loneliness of living life long-distance, yet he doesn’t seem prepared to stay in one place, and committed to one person.

His walls come down somewhat when he tells the stories behind photographs and special items that have been in the trunk of his car.  Amber has been hurt enough by loved ones walking out the door.  She wants a husband who stays.  Pastor Cal sees immediately that Amber has deep feelings for Matt, but he has not expressed anything yet on that level.  He affirms the belief that he has in the couple and warns them not to let walls keep them from a joyful and solid future together.

When Matt starts to move into a second bathroom, Amber is immediately triggered, seeing that transition as one of bringing distance between them.  “Are you a guest in my house or are you, my husband?” Amber asks.

We think this #MarriedAtFirstSight couple 💍 will make it work! pic.twitter.com/Tje5IHLLW0

Amber realizes she may have overreacted on Married at First Sight

Over dinner, she concedes that she might’ve overreacted, and says Matt can use his private bathroom to get ready, etc. “so long as you come back to me.”  Matt told Pastor Cal that he was unaware of Amber’s issues of abandonment “on such a continuing level.”  He must not be paying attention, because she expresses this need for security in many ways.  He admitted that his pride was in the way in the preshow, referring to Amber’s willingness to support their family while his business was beginning.  Security is more priceless than gold to Amber, and being there for her doesn’t cost a thing.

Deonna and Greg stake their ground

Deonna and Greg are still taking the very slow road to marital fulfillment, but Pastor Cal still believes in the pair.  He assigned them tasks for maintaining a physical connection, even in small ways.  The minister was also dumbfounded by the bride’s request not to be highly complimented.

Greg was stupefied by the stuff in every space of Deonna’s home, but when move-in day was at hand, he dutifully toted boxes and baskets loads of shoes, makeup brushes, shot glass collections, and almost everything else imaginable to make his wife at ease in their space.  She only allowed him the likes of about one square foot near the ceiling of the closet, but it was nonetheless agreeable.  She also took up virtually all the dresser-top, saying that it was “just a little bit” of room.

This Queen of her domain is definitely going to have to learn to divide by two.

Greg also put his very best foot forward in creating goodwill between himself and Sandy, his wife’s dog.  Deonna stated that “she’s skittish around men,” but the reserved pooch politely accepted a dog treat extended from a new hand.  In another scene, Greg shows off that Sandy will shake his hand. He playfully commented that the canine relationship is moving closer than their marriage.  Slow and steady can still win the race.

Next week, two of the Married at First Sight couples face true heartbreak, as per the previews.  Will they turn to support through the trial, or away from each other?

Married at First Sight airs Wednesdays on Lifetime. You don’t want to miss these new episodes.

‘Renovation Island’ Resort: How Much Does It Cost To Stay?
RHOC’s Kelly Dodd Tells RHOBH’s Erika Jayne: ‘Act In Good Faith’
’90 Day Fiance’: Anna And Mursel EXCITING Pregnancy Update!
WOW! Jackson Roloff Shows Off His Amazing Talent
‘RHOBH’: Is Lisa Rinna A Hypocrite When It Comes To Her Friends?!