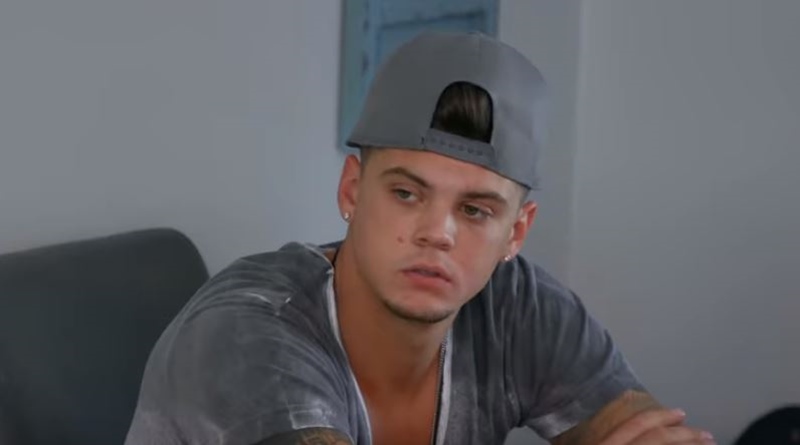 Teen Mom OG stars, Tyler Baltierra and Catelynn Lowell have been together for nearly 14 years now. We know they went through some trying times, and even had a trial separation. However, the long-term couple, who we met in 16 and Pregnant got it together. Now, Tyler took to his IG to post a photo of Catelyn asleep. It started a ruckus amongst fans of the couple. Actually, Catelyn may not be too happy with the photo, either.

Taking to his Instagram on Friday night, Tyler shared a couple of pictures of Catelynn. In the caption, he wrote, “My Babe @catelynnmtv 😍❤️ I love you so much! (sorry for taking a pic of you sleeping, I know you hate that) I just couldn’t help it! You’re so damn beautiful even when you’re not trying. I’m so blessed to have you & to hold you in my arms every night for the rest of my life!”

Aww, well that’s lovely and you wouldn’t think that would cause a ruckus: unless it comes from Catelynn when she sees he shared a photo of her asleep. However, fans got themselves all worked up when someone commented that Catelynn slept with all her makeup on. That person wrote, “Not sure about most moms, but I don’t sleep in full makeup and bright red lipstick.”

Fans of Teen Mom OG rushed to defend Catelynn. In fact, more often these days, people who post negative comments get crushed by fans tired of trolling. In this instance, many of them spoke out, and here’s what some of them said:

My Babe @catelynnmtv 😍❤️🥰 I love you so much! (sorry for taking a pic of you sleeping, I know you hate that) I just couldn’t help it! You’re so damn beautiful even when you’re not trying. I’m so blessed to have you & to hold you in my arms every night for the rest of my life! #13YearsStrong #MyPartnerThroughLife #MyBestFriend

There were many similar comments, but it turned out that those critical of Catelynn sleeping in makeup misread the photo. You see, two photos went up. It’s really obvious from the other pictures that they were on a plane.

Sleeping on a plane with makeup on makes sense

The other pictures showed the airport and the plane. As one Teen Mom OG fan pointed out, “looks like they’re on an airplane. Second pic is at the airport & first pic has the air hostesses in the background pushing the cart 🤔.” So, yeah, being critical of Catelynn for taking a nap on a plane’s a bit harsh. She’s a young mom and probably tired out.

Many fans love to comment on the posts, and Catelynn’s known for turning them off because of negativity. as one person noted, “Catelyn literally turns her comments off on her posts because of hateful cr*p like this. It’s not ok. She doesn’t deserve it regardless of whether or not she’s on TV. ” This kind of negativity only means fans of the MTV show get less chance to interact with her.

What did you think of the photo Tyler Baltierra shared of Catelynn Lowell asleep? Do you nap wearing your makeup? Was it worth posting a negative comment that caused a ruckus on IG? Sound off your thoughts in the comments below.