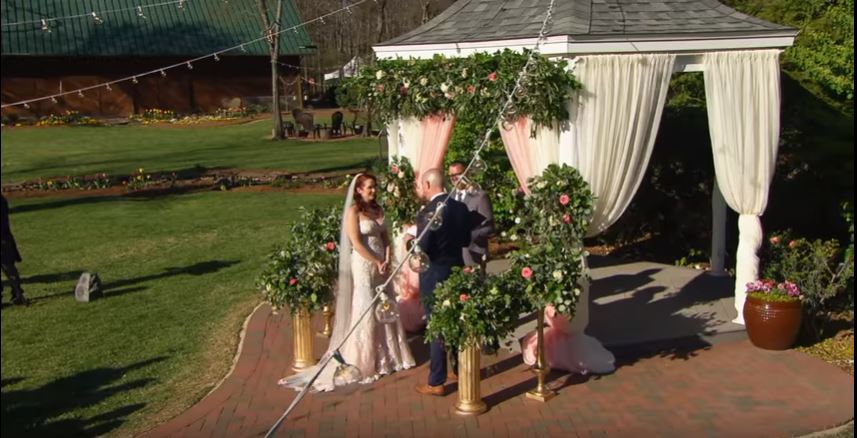 Last week on Married at First Sight, fans saw Elizabeth Rice and Jamie Thompson get married. Also, Iris Caldwell and Keith Manley officially become man and wife. The free-spirited Elizabeth definitely showed her flirty side, loving all the dips and lavish kisses from Jamie.  Her dad, Ronnie, was not a fan of the newlyweds’ unabashed affection.

This week, on the June 26 episode, the Married at First Sight father-in-law let even more of his displeasure be known to his new son-in-law.  For the first time, each of the Season 9 Married at First Sight couples had separate meetings of the bride and groom with their new in-laws.  Previously, the couples had gone together for a family brunch that typically never became too tense.

For most of the brides and grooms, the brunch conversation gave a new opportunity to deepen connections.  For Jamie, however, every response seemed to give Ronnie something to dislike.  The conversation left the new husband wondering where he fits in the scheme of his new family.  Still, Jamie seemed delighted in Elizabeth’s manner of saying anything and her lack of modesty.

The other couples, Matt and Amber, Greg and Deonna, and Keith and Iris, may not have seen as much bare skin, but they made a smooth start into their first day as a married couple.  It was a mostly easy start, with honeymoons pending, on Married at First Sight.

Amber was more than open with her lust for laying kisses on Matt.  On the Married at First Sight Unfiltered preview last night, Matt Gwynne admitted to Jamie Otis that he initially was thrown off by her willingness for open affection.  He said that he generally didn’t like too much PDA, but it’s hard not to be flattered by such a sweet bride as Amber.  He also mentioned that her smaller stature was a surprise, but nothing that he would let stand in the way of marital bliss.

Amber was very willing to let love take its course, but champagne and the chaos of the wedding combined to find the couple sweetly spooning as the lights went out.  The two shared hours of tender kissing.

Jamie was also game for romance to have its way, but he, too, imbibed quite freely.  He and Elizabeth still have the spark but didn’t light the sheets on fire on their first night.  Elizabeth did strip to very few clothes exclaiming that her written vows had fallen from their discrete placement.  True to her promise, she put a mask on Jamie before they turned in for the night.

Keith is a “gentleman”

Keith Manley was “a gentleman” to his Married at First Sight first-ever virgin bride.  He didn’t reveal that his mother told him about Iris at the reception, and let her share the revelation as her “secret” only for her husband.  Keith seems to be willing to get time and patience for now, and this pair seems perfectly matched.  Previews of next week indicate that the honeymoon hits some turbulence. Let’s hope they can ride the winds and surf.

AWKWARD…😬 This #MarriedAtFirstSight couple is about to have THE TALK! 🗣 See what happens tonight at 8:30/7:30c. https://t.co/nnM5e75nLZ

Keith won over Iris’ retired police officer dad with his promise to “be one percent better” every day, and keep Iris’ needs and schedule as his priority.  As honored as he is by her purity, can he wait for her timing to be right?

Amber was disappointed not to meet either of Matt’s parents. She remained completely understanding and supportive, letting him know that she was standing by him.  During her very friendly brunch with Matt’s friends, she discovered her husband’s creative side and his talents as a musician.  She is a rapper, so maybe they can make perfect beats together.

They may also make perfect babies.  Amber told Matt that she found out that he was Matt Gwynne IV. She was very excited about the idea of having Matt Gwynne V.  That decision can come to fruition far down the road.  It’s just another factor that makes the pair one to root for in the long haul.

Jamie started the conversation with the in-laws by saying that “just laying together” doing anything. He still felt the connection and spark with Elizabeth.  In a New York minute, Ronnie railed at the word “laying.” He took a leap right back to all the kisses during the wedding pictures that were big problems for him.   Mom was a little easier, relating how Elizabeth keeps her big heart “protected.”

That mention prompted Ronnie to tell Jamie that he would never have “that part” of Elizabeth’s heart.  “It only belongs to me,” dad insisted.  This parent who Elizabeth relies on has got to let go and make room for her to grow up, make mistakes, learn, and make a new life with her husband.  It’s hard to come down from the Princess pedestal, but it has to happen for Married at First Sight success, or any marriage to succeed. F

Difficult as this conversation was, Jamie stood firm that “I married Elizabeth, not her dad,” and the couple excitedly prepared to head for Antigua.  Elizabeth proclaimed that she was looking forward to “wearing as little clothes as possible” and her husband smiled in agreement.