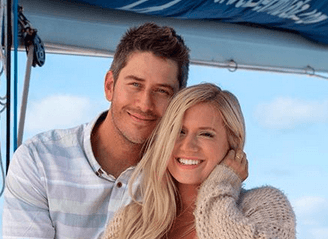 On Wednesday, The Bachelor stars Arie and Lauren Luyendyk welcomed their first child, a baby girl, into the world. On Wednesday evening, Arie added a post to his Instagram story. The post reads, “We have a healthy, BEAUTIFUL baby girl.” He continued, writing, “Mommy and baby are doing great, we are so incredibly happy.”

In the same Instagram story, Arie also added the baby’s weight and length stats. She is 6 pounds, 13 ounces, and 20 centimeters long. Her weight isn’t too far off from Arie and Lauren’s predictions, which they made while in the hospital this morning. Arie guessed that the baby would weigh 7 pounds. Lauren guessed “6 pounds, 18 ounces”.

The couple has yet to post any pictures of their new little one. They have already created an Instagram page for their new daughter. Throughout Lauren’s pregnancy, they shared bump pictures on this account. Soon, it will be flooded with cute pictures of the baby.

The Bachelor fans got updates while Lauren was in labor

Lauren went into labor on Tuesday. From the point that the couple arrived at the hospital last night, they were sharing lots of updates on social media. Even though Lauren was in labor, she seemed very active and upbeat. In the videos and pictures they posted on Instagram, she didn’t look to be in a lot of pain.

When they arrived at the hospital Tuesday, Arie posted a picture of the couple. In the photo, Lauren is wearing a hospital gown. It looks like they are standing in the hallway of the hospital. In the caption, Arie writes, “IT’S HAPPENING!”

At 5am, fans received an update from Arie in the form of an Instagram story. The story says, “A little update… It’s 5am and Lauren just received an epidural. She is doing great and everything is going smoothly! We are going to try and catch a little sleep and hopefully we will meet our baby soon.”

Just a couple of hours before Arie uploaded the birth announcement via Instagram stories, he and Lauren were making predictions about the baby’s weight, hair color, and more. Lauren wasn’t pushing at this time so it seems like the delivery went quickly and smoothly.

Have you been following along as Lauren has been in labor? Are you excited for the new Bachelor baby to be here? Let us know what you think in the comments!

For more updates about Arie and Lauren, don’t miss the news from TV Shows Ace!