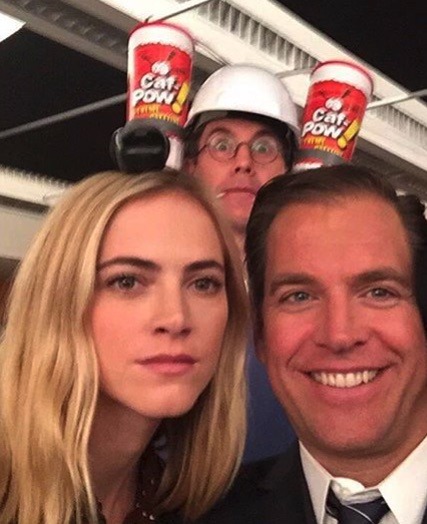 NCIS Season 17 promises to be incredible because Season 16 ended with an absolute shocker. Fans were sharing their tears of shock and joy on social media. This makes fans wonder what the upcoming season has in store. Could this mean the return of Michael Weatherly’s charismatic Anthony DiNozzo? There are spoilers here, so if you have not seen the NCIS Season 16 finale, “Daughters,” return once you do.

Could NCIS Season 17 Include The Return Of DiNozzo?

On Tuesday, NCIS fans saw the unthinkable: Ziva David (Cote de Pablo) returned! She visited Gibbs (Mark Harmon) at his basement woodworking workshop. She was there to warn him that he was in danger. All Gibbs could say was “Ziva.”

Now that it has been announced that Ziva David will return for the first episode of Season 17, and possibly more, fans wonder whether Anthony DiNozzo (Michael Weatherly) will return. DiNozzo is in Paris, with Talia, his daughter with Ziva. Since his departure three years ago, Tony has been part of the conversation, although he is mentioned less frequently. Fans were certainly paying attention during the Season 16 return of DiNozzo Sr., portrayed by Robert Wagner. Could the Ziva story continue with the return of Tony?

This is not a drill everyone.
Welcome home #Ziva
People… see you all season 17.#NCIS pic.twitter.com/qVb1hCJkiL

What does Michael Weatherly think now? We don’t know. Pop Sugar has pointed out that he has conveniently left social media right before the return of Ziva. He may be trying to avoid spilling any secrets. Fans may not know what he thinks or knows now, but they do have record of what he has said in the past and tweeted it after Ziva’s surprise appearance on the season finale.

Back in February 2018, Michael Weatherly had tweeted his belief that the Ziva story was not over. He thought she was still alive, and he was prepared to return as Tony DiNozzo when she did return to the show.

Weatherly is currently starring in Bull, another CBS show, that was recently renewed. It is pretty obvious that the powers that be are not about to prevent one of their biggest stars from returning to their top show for some special cameos. 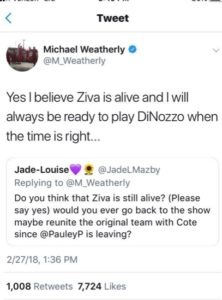 Whether Ziva David and Tony DiNozzo are reunited on NCIS or not, Michael Weatherly and Cote de Pablo are already reunited on a new CBS show they are developing, called MIA. The premise of the show is about a female homicide detective that is known to bend the rules, has a new partner who is all about the rules. Although no actors have been signed on, the executive producer is Shepard Boucher.

Are you ready for a Tony and Ziva reunion on NCIS Season 17? Do you think Michael Weatherly will return to NCIS? Do you think he left social media to avoid any spoilers? How do you want this story to play out? Please share your comments and predictions below. NCIS will return to CBS on Tuesday nights in September.