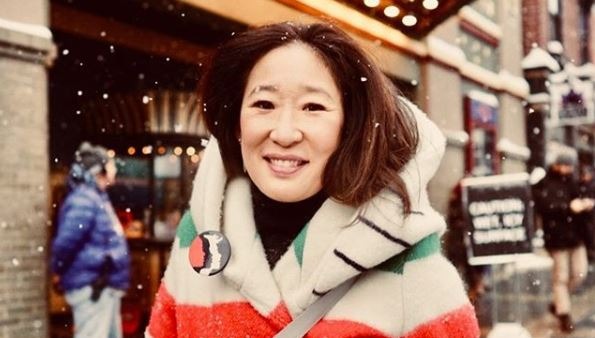 In a recent interview with The Holywood Reporter, Killing Eve executive producer Sally Woodward-Gentle revealed that the minds behind the show have not yet decided how the show will end.

The suspenseful Killing Eve series is in its second season. The BBC and BBC America production airs on AMC in the states and has been well received. Despite the fans hunger for more, many are asking, “How will the series end?” The series title seems to signify that the lead character, Eve, will meet her demise at some point. The question remains, how long will the writers and producers be able to prolong the story? What direction are they going in?

During her recent sit-down with THR, Woodward-Gentle responded to the questions about the show’s future. “What will the ending look like?” The Killing Eve producer had a very simple answer: “Who knows.” The exec revealed that the eventual ending to the deliciously twisted plot has NOT been conceived. When asked about the fate for Sandra Oh’s character, Eve, Woodward left a lot hanging in the air. She reminds viewers that while some sort of ‘death’ is implied — it may not be the ‘murder’ that they expect. “It is called Killing Eve but also Eve is all women, so what does that mean? Who knows?”

Woodward’s answers are vague but they do give fans a new perspective. It also leaves room for the show to last longer than some might expect.

So what does the future of the show look like?

Having picked up both a Golden Globe and a SAG award in 2019, it’s easy to see why the network has already picked up the show for a third season. Despite a successful run with Season 2  showrunner, Emerald Fennell, changes are coming. The third season of the will be run by former Fear the Walking Dead writer Suzanne Heathcote. She is also filling the role of lead writer.

The creative team members behind the show are dedicated to keeping the show “fresh” as long as they can. Woodward-Gentle expresses that they want to keep their audience engages and push the boundaries of what Eve and Villanelle’s relationship is perceived to be. “I think if it ever got to a point where it felt like we were just repeating,” the producer inflected “Then I think we’d gone wrong.” She also reveals that they are excited to explore the world revolving around these characters and delving into what the ‘obsession’ looks like from outside characters’ perspectives.

Where Can I Catch the Show?

Killing Eve is about halfway through its second season and can be watched in the US on Sunday nights at 8 pm on both the AMC network and BBC America.

If you are new to the club and want to catch up, you can head on over to Hulu to binge the first season and early episodes of the second season in their streaming library.

Janelle Brown Encourages Fans To Change: ‘Do Something Different’
Netflix Original Series ‘Echoes’ From The Man Behind ’13 Reasons Why’
Kim Kardashian Chases ’More Elevated’ Promise With Sexy Lingerie Snaps
Meri Brown Gets Cryptic About ‘Being Broken,’ Is She Alright?
Jenelle Evans Reveals Petty Details Of Split From Nathan Griffith