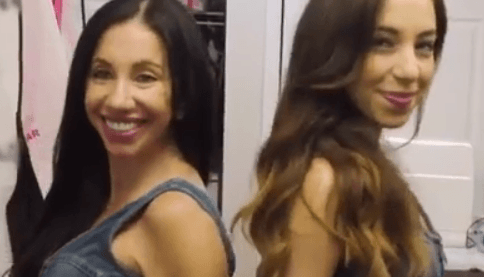 A lot of moms and daughters are happy to be close with one another. Of course, there are still some things that moms and daughters keep private or don’t do together. Well, some mom and daughter pairs are challenging that. TLC recently announced a new show that showcases some of the most extreme mother-daughter friendships

TLC shared a clip from the show on their Instagram page on Wednesday. In the caption, the network wrote, “Think you and your mom are close? Think again! TLC’s mom-umental new series follows four closer-than-close mothers and daughters. #sMothered premieres Sunday, June 9 at 10/9c.”

In this clip, we can see all kinds of mother-daughter friendships, but they all have one thing in common: they are extremely close to each other. Based on the caption posted with the clip, it’s obvious that these mothers and daughters are weirdly close.

One of the moms on the show says, “We act alike. We dress alike. We’re like twins.” The clip shows this mom and daughter duo dressing alike. Then, the clip shows the mother getting Botox injections and saying, “After this, I’ll really look like you.”

Though most of these mom and daughter pairings are unfamiliar, fans were quick to recognize Cher Hubsher from My Super Sweet Sixteen on MTV.

How are fans responding to the new TLC show?

The show is set to make its debut in June, but fans are already leaving comments on TLC’s Instagram post about the show. Overall, fans are saying that this new show is very strange and that these friendships aren’t normal at all.

Here is what a couple of fans had to say:

A lot of fans also commented and said that they would be watching it. They started tagging their friends’ social media accounts and asking them to watch the show with them. It looks like a good number of TLC fans are already interested in the show.

How do you feel about the new clip of sMOTHERED? Will you be watching the show? Let us know in the comments below!

Watch sMOTHERED on TLC when it premieres Sunday, June 9 at 10/9c. For more updates about TLC shows and your favorite reality TV shows, don’t miss any updates from TV Shows Ace!