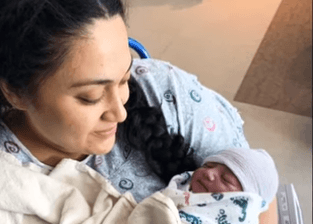 90 Day Fiancé stars Kalani Faagata and Asuelu Pulaa have announced that their newest addition has arrived. They each shared an Instagram post directing fans to watch their vlog of the baby’s birth on YouTube. This has fans excited to see an update!

In Kalani’s post, she said, “Our baby was worth the constractions. New vlog is up now!” This caption was posted alongside a short clip of herself while she was laboring in the hospital. She used the incorrect spelling of the word contractions because Asuelu mispronounced the word in the vlog.

Our baby was worth the constractions 😝👶🏽💙

How was Kalani’s pregnancy?

The couple already has one son, Oliver, together. Oliver celebrated his first birthday in January of this year, which means the two kids are just over a year apart in age. Fans say that Kennedy and Oliver already look a lot alike. In the vlog, Oliver gets to meet Kennedy for the first time.

Earlier in Kalani’s pregnancy, she mentioned how hard this pregnancy was on her. She was struggling both mentally and physically. After that update, everything seemed to go more smoothly. Baby Kennedy seems to be healthy and he was carried to term.

This pregnancy was unplanned and Kalani had hoped to have a little bit more time between the kids. She didn’t have a lot of time to adjust to motherhood before having a second child. It looks like the couple is still very excited about their new addition and wouldn’t have it any other way!

A few days ago, Kalani posted an ultrasound picture on Instagram. She wrote a caption saying, “I’m a few days overdue with this lil beaut. GIVE ME YOUR TIPS ON INDUCING LABOR NATURALLY.” It sounded like she was eager to have this baby. It’s unclear whether she went into labor on her own or with the help of a suggestion from a fan. Either way, we are sure she and Asuelu are thrilled to have their new son here.

I’m a few days overdue with this lil beaut. GIVE ME YOUR TIPS ON INDUCING LABOR NATURALLY. I don’t want that regular list that only works for some people—I want that top secret shit from your grannies and great-grannies that they’d back-hand you for telling me. 😝💅🏽👸🏽❤️

How are 90 Day Fiancé fans responding?

Fans of the show and fans of Kalani and Asuelu are very excited for the family. In the comments on their Instagram posts, fans are leaving all kinds of sweet and encouraging messages. They love the baby’s name and the fact that the family was able to document the birth.

In response to Kalani’s medicine-free birth, fans are cheering her on and saying how strong she is. One fan wrote, “Are you real ?! Momma you’re killing the labor game. I cannot get over how in control you are! You are meant for natural labor! Congrats!”

Are you excited for Kalani and Asuelu’s little family? Did you watch the vlog about baby Kennedy? Let us know in the comments below!

For more updates about 90 Day Fiancé and your other favorite shows, don’t miss any news from TV Shows Ace!