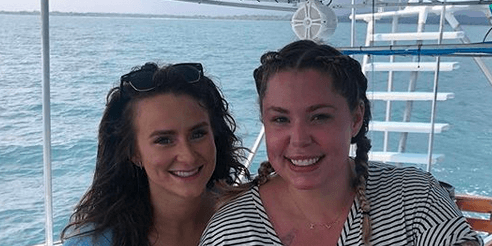 Currently, best friends Kailyn Lowry and Leah Messer of Teen Mom 2 are vacationing in Costa Rica together. The two friends have been sharing lots of pictures of their vacation so far. In response to some of these social media posts, rumors have been circulating that Kailyn and Leah are dating.

Why did fans say that Kailyn and Leah are dating?

These rumors could be because they are on vacation together or because they have been posting pictures together. No matter what the reason, plenty of fans had something to say about this in the comments sections on their social media posts. Of course, this is nothing abnormal for a couple of friends.

Then, a fan sent out a tweet that says, “I was wondering how long it would take for some article to say @KailLowry and @TM2LeahDawn are dating.” It’s obvious that this fan was joking about the number of people asking if the two are dating.

How did Teen Mom 2 star Kailyn Lowry respond to the comments?

Then, Kailyn decided to quote the tweet. In her tweet, she says, “Plot twist” along with a couple of laughing emojis. It’s clear that she is denying these rumors by sending out this tweet. She seems to think that the whole thing is ridiculous.

After the clarification tweet was shared, a fan commented on one of Kailyn’s Instagram posts and said, “You’re sitting next to each other. You must be dating.” The fan is further poking fun at the idea that the best friends could be dating.

Plenty of other fans are saying how crazy it would be to think that Leah and Kailyn are dating just because they are on vacation together. Sure, they are sitting close to each other or posing in a cute way, but that certainly doesn’t mean that they are dating.

Luckily, Kailyn seemed to think it was funny and just laughed it off. We’re sure Leah had a good attitude about the whole thing too.

What do you think about these rumors? Did you believe them or think that they were untrue? Let us know in the comments!