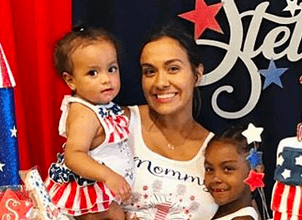 Teen Mom 2 star Briana DeJesus likes to keep fans updated on her life. She’s often posting pictures of herself and her two young daughters. Fans love the cute pictures and videos of the kids!

DeJesus updated her fans via Instagram stories. She originally posted a Boomerang clip of herself laying in the hospital bed with her youngest daughter, Stella. Stella is one year old. Later, on Friday, DeJesus added a video to her Instagram stories. In the video, Stella is laying in the hospital bed, playing with a balloon made out of a latex glove. 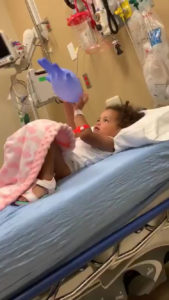 In the video, DeJesus asks, “Hey, you OK?” Stella responded by saying “Yeah!” and giving the camera a big smile. Then, DeJesus says, “Of course my baby is OK.” It seems like Stella was very brave in the hospital. She seems to be doing well now.

As of right now, DeJesus hasn’t shared why her daughter ended up in the hospital. We’re sure she’s focusing on making sure Stella is okay and will update fans if she wants to. In the past, Stella has had to go to the hospital due to her health issues.

What health issues does Stella have?

It looks like this isn’t the first time DeJesus has had to take her baby to the hospital. Stella actually has a couple of scary health issues, which means she spends a fair amount of time at the hospital. In 2017, DeJesus spoke with Radar about these health problems. She said, “She has some heart condition, she has holes in her heart. It’s been difficult dealing with Stella right now.”

In August 2018, DeJesus updated fans via Twitter and said that the holes had closed up and that Stella no longer had heart murmurs. Later that month, another health problem became obvious. She was hospitalized due to septic arthritis, which DeJesus says is “common in kids.”

On Teen Mom 2, she went into detail and described this scary experience. She said, “A few days ago, I noticed Stella was having trouble moving her arm. So, I took her to the hospital. It turns out she had a serious bacterial infection and had to have emergency surgery.” When DeJesus talked about this on the show, she said it was possible for the infection to come back.

Recently, DeJesus hasn’t shared much about her daughter’s health, aside from this recent hospitalization. This could be a good sign.

Though this was all a scary experience, it looks like Stella is doing well in the Instagram update. We hope that her recovery continues to go smoothly.

For more updates about your favorite reality TV shows and stars, check back on TV Shows Ace!