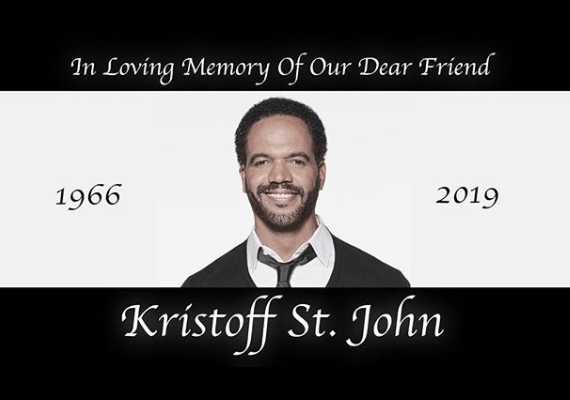 It was only months ago that the soap community mourned the death of Kristoff St.John.  This week Y&R celebrates his life and legacy. In Genoa City, the week is filled with emotion as news breaks of Neil Winters death at midweek.  Many familiar faces will make a return to celebrate a friend onscreen and off.  There will also be some recastings appearing this week.  In addition to the typical Abbott versus Newman, subterfuge viewers have come to expect.

Kyle and Lola Make a Scene

Tomorrow is Abby and Devon’s big day! 🙌 To get a first look at #YR’s newest set before opening night, click the link in our bio. @mel_ordway is giving you an EXCLUSIVE tour of Society! ✨

At the grand opening of Lola’s new venture, Society, she and Kyle are spotted getting cozy.  Nick spots his niece’s husband kissing another woman.  When he sees Lola and Kyle kissing, he becomes irritated and confronts Kyle.  Shockingly, it is Summer who intercedes on Kyle’s behalf and keeps her uncle from causing an even bigger scene.  What does Summer have up her sleeve? It is very unlike her to protect the interests of anyone but herself, especially when Kyle and Lola are involved.  Has she had a change of heart?

Jack is Always the Last to Know

For a character described as business savvy, Jack always seems to be the last to figure out what is going on at Jabot.  He finally learns that Ashley has been pulling strings from afar to regain control over Jabot that was ruefully taken from her.  Oh, silly Jack.  At an event for Ashley’s daughter, he confronts her.  Ashley claims she is only at the event to support her daughter, and Jack replies that she must mean her company.  He knows what she is up to but too little too late.

Adam Recast back on the Scene

Since the departure of Justin Hartley three years ago, Adam Newman has been off the scene in Genoa City, and fans miss him dearly.  Adam has been a character who has been subject to perennial recasting.  Although, the previous iteration of Adam Newman played by Hartley was quite memorable.  Mark Grossman will be replacing Adam beginning this week.  He has large shoes to fill, but perhaps fans have had some time to forget the previous Adam and will be happy to have the character back on the scene.  Here’s to hoping the new Adam Newman is even better than the past.

To honor Kristoff St. John, #YR will air a special tribute to him during the show on Friday, Feb. 8. His final episode of The Young and the Restless will air tomorrow. Please join us in saying goodbye to a beloved member of the Y&R and @cbsdaytime family. ♥️

Devon asks Lily if she has heard from their father.  When Lily responds no, they begin reaching out to him to no avail. His penthouse is searched where he is found dead.  Quickly news of his death spreads through the town.  Everyone is devastated by his death.  As Genoa City begins to mourn Lily begins to have a breakdown.  Unable to cope with her father’s death, Lily aims Devon.  She is angry Devon never suspected that something might be wrong with Neil and that nobody was able to intercede and save him.  The mourning process for this town is going to bring back many familiar faces.  Finally, the death of Kristoff St.John will be celebrated in spectacular style.

For all this week’s drama on The Young and the Restless tune into CBS on weekdays.

Is Jessa Seewald Milking Her Birth Story For More Views & Revenue?
‘B&B’ Spoilers: Steffy And Brooke Battling Over Forrester Again?
Javi Marroquin Calls Cops On Lauren Comeau For Abuse, Guess Who Has His Back On This?
‘Manifest’ Uncancelled?! NBC & Netflix Reconsider Season 4
‘Vanderpump Rules’ Season 9 Will Be More Exciting Than Fans Think