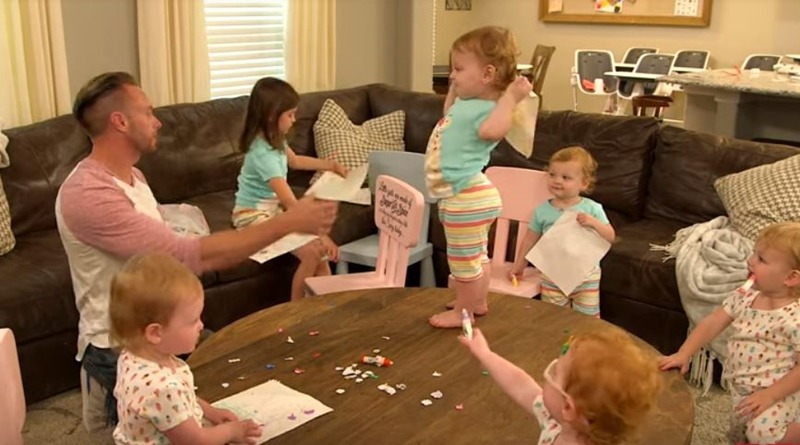 OutDaughtered fans can’t wait for TLC’s return with a new season. In the meantime, Danielle Busby keeps fans updated with the lives of her, Adam, Blayke Louise, and the five quints. This weekend, Danielle shared some lovely clips of the family enjoying Saturday family fun. With all those girls enjoying themselves, that made for loads of giggles.

OutDaughtered with the Busby family thought to return in summer

Waiting for confirmation dates of a new season of OutDaughtered became only bearable because Danielle often shares photos and clips of the girls. Monsters and Critics mentioned something about that, writing, “Busby family to be back on TLC sometime in July. Depending on the number of episodes taped, the show should run through the end of September or the very beginning of October.”

However, fans of the show know that no matter how long they wait, there’s always Danielle’s posts on Instagram. Plus, Adam Busby’s also good with bringing new stuff to the It’s a Buzz World YouTube channel. There are all sorts of short clips of the girls. One is the release of Crush the turtle, which was a bit emotional for some of the quints.  You can see the clip below.

Danielle Busby took some video clips of the family enjoying a lot of fun this weekend. Saturday family fun brought loads of giggles. In fact, you really can hear non-stop laughter from the kids as Adam plays with them in the pool. Danielle inserted the words, “So many little giggles” in the text overlay. It also looks like puppy Beaux had a fun time too, as she added a selfie of the little dog all worn out.

Some of the footage shown came from the itsabuzzworld account, and the rest came from Danielle. In the Instagram story clip below, we see Adam also getting pretty much exhausted as he tows the chain of giggling girls across the pool. Next, in baby-pool, the girls go all out playing with dad, who looks like he’s getting the worst of it! The video only runs for a short time, but you really get the feeling this OutDaughtered day bubbled with happiness.

OutDaughtered family enjoyed so much fun in April, birthday month

April’s been a wonderful month with lots of fun and laughter. It was birthday month for Blayke and the quints. Now, growing up so fast, the quints are four-years-old and Blayke’s eight. Last week, Danielle shared a photo of all the girls dressed up for their party. She wrote, “It’s a privilege to be called your Mommy! I am grateful that God has given me this title for you. I love you all to the moon and back and further than that!” Judging from the fun the girls get in with their parents, probably there’s a “Back at ya mom” from all her daughters.

Remember to check in with TV Shows Ace often for more news about OutDaughtered.