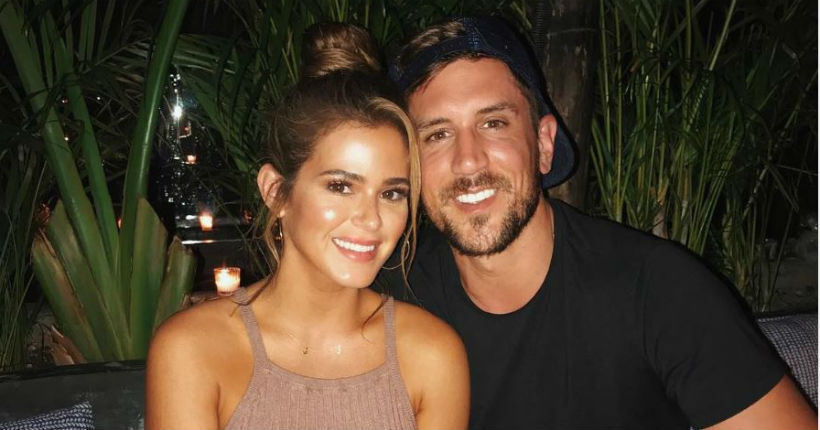 JoJo Fletcher and Jordan Rodgers continue to be a fan favorite success story from The Bachelorette franchise. The couple got engaged at the end of the 2016 season and are still going strong. In 2018 JoJo and Jordan started a reality series on the daily struggles and successes they face as a couple in the spotlight. The web-series titled Engaged With JoJo and Jordan takes fans inside their daily life where they share it all from the good to the bad. Now, however, after two seasons, they are shifting plans.

This week, JoJo and Jordan took to the Engaged Facebook page to share an exciting announcement with fans. They shared they will be taking a break from filming new episodes of Engaged to work on a new project. While they didn’t share exactly what the new project is, they did say it was coming to “another type of screen near you very soon.”

Fans are speculating and already thinking that JoJo and Jordan may be doing another type of reality series. Hopefully everyone won’t have to wait too long to find out what this powerhouse couple is up to. What do you think JoJo and Jordan have planned?

We can't thank you enough for your endless love & support! See y'all again soon! ❤️

Are JoJo and Jordan planning a wedding soon?

Since being engaged in 2016 fans have been waiting for wedding plans to be announced for JoJo and Jordan. After his brother’s wedding this past Sunday, Jordan referenced his engagement to JoJo on Instagram by saying, “Wedding Day for these two! Couldn’t be happier to add a sister to the family! @joelle_fletcher we are up next!”

The couple has recently expressed their plans to announce a wedding date soon. As for if it will be another Bachelor televised wedding is still up in the air. JoJo recently shared with Entertainment Tonight that she and Jordan are not completely opposed to a televised wedding. She did say, however, that it would have to be just the way they want it.

Other projects JoJo and Jordan are completing

Not only have JoJo and Jordan been busy with their web-series, but they have also been busy with other projects. Aside from Jordan’s career as a sportscaster, he and JoJo have apparently been renovating houses.

Jordan posted a photo on Instagram of the two having fun in which he says, “Renovating properties with my best friend has taught me two things: She’s the boss, and…she’s the boss. Oh and bubble baths on the job are perfectly acceptable…as long as I patch the holes.” The two continue to show their love for one another in everything they do as they work to build their future.

Renovating properties with my best friend has taught me two things: She’s the boss, and…she’s the boss. Oh and bubble baths on the job are perfectly acceptable…as long as I patch the holes 💪🏽🙄

Stay tuned as more information comes out about JoJo and Jordan’s future plans and hopefully an upcoming wedding! The new season of The Bachelorette will premiere May 13 featuring Alabama beauty queen Hannah Brown.

‘Happiness For Beginners’ Adaptation Coming To Netflix With Ellie Kemper
Todd Chrisley Is Proud Of His Baby Boy Grayson & Here’s Why
‘Below Deck Med’: Bobby Reveals Season 2 Regret With Hannah
Megan Fox Flashes Under Bust, Gets Groped By Kourtney Kardashian
‘Welcome to Plathville’ Spoilers: Moriah Plath Gets Sassy About Max