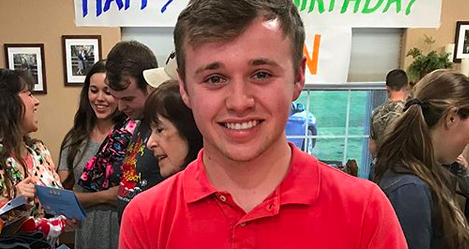 In the Duggar family, there is always big news to be announced. It seems like somebody is expecting or getting married. Now, Jason Duggar is in the spotlight.

Now, there are often rumors going around about the Duggar family members. That is the case for Jason Duggar at the moment. Of course, there’s a chance that these rumors are true.

Since he isn’t already officially courting, married, or starting a family, fans haven’t seen a lot about him yet. The Duggars with more life events happening generally get a lot more attention.

Jason Duggar is the 12th Duggar child out of the 19 kids. He is 18 years old and will turn 19 in April. Though he seems fairly young, the Duggars tend to begin courting and getting married around this age.

Jason! The big 18! We love you so much! You have a very bright future ahead because of your commitment to Christ and your kind way of caring for and serving others. We love the great example you are for your younger brothers and sisters. We are thankful for so many wonderful memories and the exciting days to come! It was a lot of fun to celebrate you with family and friends at your early birthday party.

What do we know about Jason Duggar being in a courtship?

So far, there has not been an official announcement that Jason Duggar is in a courtship. Based on what fans have been picking up on, it looks like it’s a very possible story. Still, there’s always a chance that the rumored couple is just friends!

Recently, fans are noticing that Lauren Caldwell is appearing in quite a few photos with Jason Duggar. Some of these include mission trip pictures in February of this year.

Another hint is that Jason Duggar is flipping houses and shows interest in real estate like his dad, Jim Bob Duggar. While he could be doing this for fun, he may also be preparing to support a future wife and family. After all, he’s the right age for a Duggar to court, marry, and start a family.

In the past, the Duggar family has postponed making big announcements in order to keep people interested in their family. Right now, the main focus is on John and Abbie Duggar’s wedding. They may be waiting until that excitement dies down to break the news about Jason Duggar’s courtship if it’s true.

So, do you think that these rumors are true? Let us know in the comments below! Be sure to watch TLC’s Counting On on Monday nights at 9/8c.

Check back on TV Shows Ace for other Duggar updates and more reality TV news!

Is ‘American Pickers’ Co-Star Is Behind Mike Wolfe’s Recent Breakup?
‘Love After Lockup’ SHOCKING Spoilers: Are Stan And Lisa Still Together?
Lori Loughlin One Step Closer To Returning To ‘When Calls The Heart’
‘Welcome To Plathville’ Ethan Accuses Olivia Of Changing
Lori Loughlin, Husband Splash Out On Multi-Million Dollar Abode