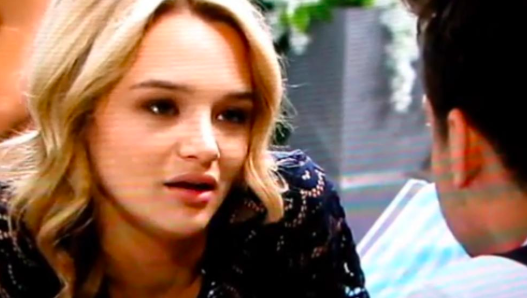 Ah, sweet young love.  Two morally bankrupt lovers are finally getting together.  Kyle Abbott and Summer Newman have become engaged, while Lola remains unresponsive in a hospital bed. Fans love to hate-watch this pair but are putting them together too much on the viewer? Or is it just right? Poor Lola.  She might live to see another day, but the fall-out from Kyle’s betrayal might ruin all the great scheming he did.  Lola might not survive learning that Summer stole her man away while she was comatose. What’s next for these scheming youths in Genoa City?

Could you see Summer as Mrs. Kyle Abbott? Tell us what you think about this wedding proposal! #YR

In exchange for her liver, Summer has made quite the bargain.  She wants Kyle’s hand in marriage.  As expected, Summer got just what she wanted without taking on Lola at all.  In her mind, Lola is already disposed of in her comatose state.  Since Summer does not have a soul, this seems like a perfectly even trade.  Her liver and Lola’s life are just pawns in her game.

In the March 7 episode, Kyle makes a point of telling the doctor that he would like the donation of the liver to remain anonymous and also notes that he has a way of getting Summer to do what he wants to expedite the surgery.  Silly Kyle, he can’t make Summer do anything she doesn’t want.  While he might think he holds all the chips to this bone of contention, he would be foolish to assume so.  Summer is more slippery than she appears under her flaxen waves.

Not So Fast You Lying Sack of Donuts

At lunch with her mother Phyllis, Summer somewhat unceremoniously announces that she and Kyle have become engaged.  Phyllis reacts in stunned suspicion and rightfully so–Phyllis is no stranger to her daughter or the deception that runs rampant in Genoa City.  Kyle and Summer have never formally been together; Summer’s mooning over Kyle and manipulation do not a relationship make.  Summer in her typical fashion feeds her nonsense about always being in love with Kyle, an explanation her mother doesn’t take.  She asks Kyle to explain the engagement independently.  Kyle spews the same nonsense as Summer and places an arm around her waist.  For some reason, Phyllis accepts this farce as reality.  She should know by now that Kyle is incapable of forming his thoughts especially when there is sex on the line.

Sending our ❤️ to all of the #YR fans today. Happy #ValentinesDay from the cast and crew! As our gift to you, check out our Instagram stories for a Y&R Valentine you can customize and send to your friends. 💌

Only Fools Rush In; Wedding Bells are Imminent

Spoilers around the web are suggesting that the wedding between Summer and Kyle is happening sooner than expected.  Photos have been leaked of the marriage.  A deal is a deal, after all, no wedding, no liver.  Kyle’s time to pay the piper is now, and who knows there might even be a little action in it for him. Some fans are claiming what Kyle has done is the ultimate act of love for Lola.

That seems untrue; he already had one foot out of that relationship long ago.  Not to mention the boy is very sex-motivated, something that Summer is more than willing to offer.  Perhaps there is some silver lining in this union, after all, finding someone who’s morals (or lack thereof) match yours only happens but once in a lifetime.  These two might just be made for each other.  More likely though, Kyle is in big trouble.  Readers should not forget the fate of Summer’s first husband. He’s dead.  Oh Kyle, you sweet, feckless munchkin, you are toast.