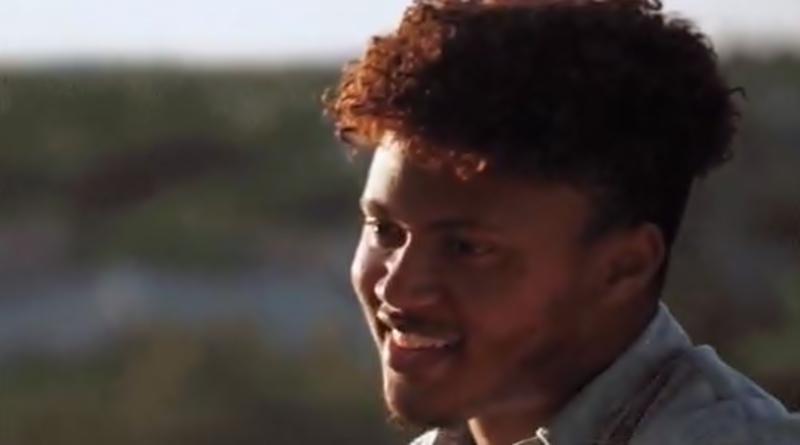 I Am Jazz aired Monday night and social media comments continue to express concern about Jazz Jennings’ boyfriend Ahmir Steward. In the previous episode, we saw Jazz talking to her parents about him and her dad seemed concerned about his unemployment and the fact that he wasn’t in college. Now, Jazz went to her Twitter during the show and told fans he attends college. Plus, Ahmir already tackled his mental health issues.

I Am Jazz airs after current live events

Fans of the TLC show don’t really know how things moved on since the series’ shooting began, as I Am Jazz airs after current live events took place. Determined to tell her fans that Ahmir is not quite the loser some people think he is, she posted about it on Twitter. In her tweet, she said that he’s not only in college, but gets good grades. In fact,” he is currently at college right now and has a 4.0 GPA.”

Actually, on Ahmir’s Instagram, at least one post talks about him struggling with mental health issues. On that post, Jazz’ fans stepped up to tell him to get a college class and work towards “some direction.” However, it seems the comments came from not knowing that he is actually at college now. Perhaps, that’s why Jazz took the time to put people right on Twitter. Well-meaning fans also suggested he gets some help for his mental health problems.

To everyone commenting on Ahmir not having a job or being in school, he is currently at college right now and has a 4.0 GPA❤️ #IAmJazz @TLC

Ahmir Steward’s at college but struggles with mental health issues

Taking to his Instagram stories Monday night, Ahmir outlined more about his mental health issues. Actually, the fact that he is at college may help him deal with insecurities over his future. However, fans who may think he needs to see a professional in the mental health field need not worry. In fact, he already did, and it sounds quite extensive.

In his Instagram story, Ahmir details how he lost some friends along the way. However, he acknowledged the support of Jazz and her family. He wrote, “These past two week’s I’ve been in and out of hospitals to take care of my mental health.” He added that he never realized that unattended issues just “got worse over time.” He said that he met wonderful people, but couldn’t make friendships. Actually, he noted that he was judged for what he lacked and that was “understandable.”

Jazz Jennings and her parents helped him

Ahmir detailed how his “own emotions and interactions with other people” were deficient and that extended to Jazz. However, he felt Jazz and her parents helped him. “The family…welcomed me with open arms despite all of what I lacked.” Very sweetly, Ahmir added, “For that, I am extremely grateful.” More detail followed, where he thanked those who stayed by him. Giving some kind of spoilers for the I Am Jazz season, he also mentioned that his mental health issues could be “the elephant in the room” in upcoming episodes. 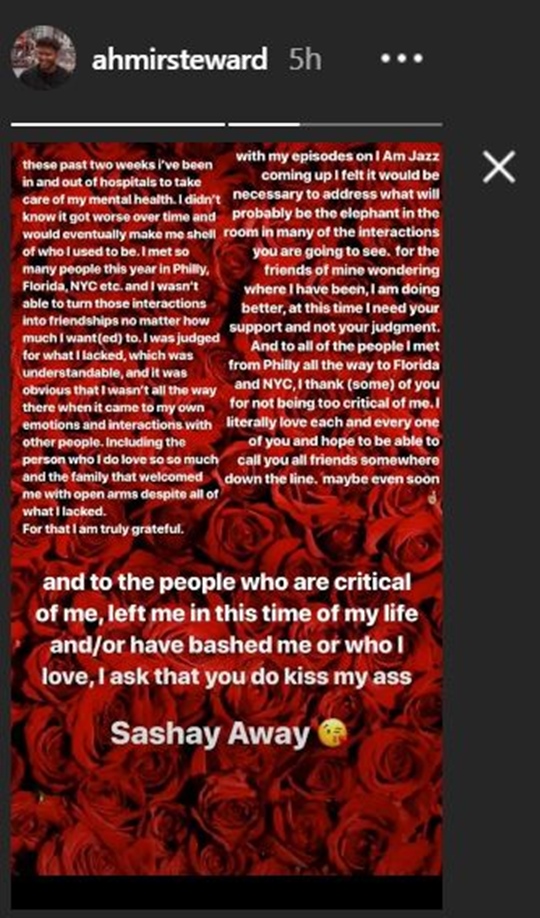 So, there you have it. Since we first saw Ahmir Steward on the TLC show, he actually enrolled in college and went to get his mental health issues attended to. That’s admirable and he seems such a nice young man. Actually, what came across as shyness with Jazz talking so openly about her intimate fears and desires in a flirty way, may be a reflection on his mental self-esteem. However, he’s trying his best to gain direction and obtain professional help for himself. Plus, Jazz Jennings seems to be there for him, all the way.

What do you think about the fact that Ahmir enrolled and currently does well at college? Do you think that dealing with his mental health and talking openly about it is a good thing? Sound off your thoughts in the comments below.

Remember to stay in touch with TV Shows Ace often for more news about I Am Jazz.