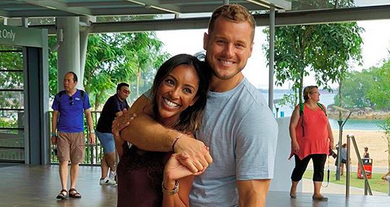 Contestants on The Bachelor come from all different backgrounds. Some have dated a bunch of guys and others have little experience. Recently, Tayshia Adams shared her dating background.

On Monday, US Weekly reported that Tayshia Adams has a very recent dating history.

As it is expected, she broke up with her boyfriend right before leaving to film The Bachelor. Shockingly, it was actually the day before she left when she officially split it off. This is cutting it close, but that’s just how it worked out for the couple.

When Tayshia Adams and Chase Olswang met each other for the first time, she had just gotten through her divorce. She says that she wasn’t ready to date, but things began moving quickly.

The two were dating for 10 months when she called things off. At that point, they had been considering getting engaged or married. The couple was dating exclusively and they weren’t seeing anyone else. This sounds like it was a pretty serious relationship.

What does Chase Olswang have to say?

Funny. I spoke with Chase on the phone last Wednesday and he basically told me the same exact things. Almost word for word. The timing is not a coincidence https://t.co/oUvZKPxH5f

From what it sounds like, the former couple has given details that match up with each other. They seem to have shared the exact same details.

It’s likely that her ex-boyfriend was understanding about the whole thing. It’s not like she would have this same opportunity again.

Still, he noticed a few small changes as the the deadline for her decision about the show drew near. He says, “She was still back and forth … she wasn’t sure. As it got closer, I could kind of see changes between us and I could kind of tell that she was leaning toward going. I don’t know all of the exact reasons for that.”

Does Tayshia Adams still talk to her ex?

It turns out that Tayshia Adams and Chase Olswang are talking now that the show is done filming. It’s unclear whether the two will get back together or not.

Since they broke up right before the show began filming, there is a chance they were in contact then too. They might have had some things to sort through post-breakup.

Now, they aren’t talking a whole lot. Chase Olswang explains their current communication, saying, “There is an open line of communication. We’re there for each other if we need to be, but things have changed quite a bit since she’s come back.”

Maybe something will come from these conversations or maybe the two will remain friends. One source said, “It’s a messed-up situation. He was in love with her. He’s not anymore, but he still loves her.”

Be sure to follow along on TV Shows Ace for more updates about The Bachelor. Don’t miss Tayshia Adams on The Bachelor on ABC on Mondays at 8 p.m. ET!