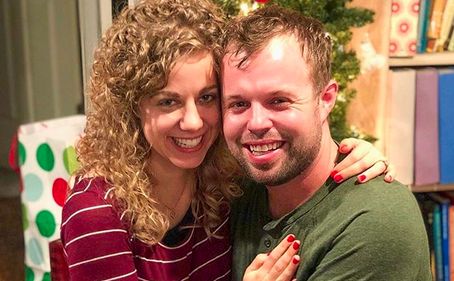 In the Duggar family, the children are supposed to be in courtships. John and Abbie Duggar had a different courtship than the other Duggars. A courtship isn’t the same as casual dating. It also comes with a set of rules to follow. For example, they have to bring a younger sibling along as a chaperone on dates.

Just recently, John-David Duggar cleared up some information about his courtship with Abbie. In this video, he explained how he and Abbie made their own courtship rules. This includes PDA.

Usually, the Duggars refrain from hugging, kissing, and any other PDA until they’re married. It’s a big deal when they share a kiss on their wedding day!

In the video, he explains how they came to this decision. He says, “We chose to be able to have some contact versus no contact. I will put my arm around her, give her a hug.”

He also says that they created their own “very strict standards on what is okay and what is not okay.” They chose not to kiss until they were officially married.

Why did John and Abbie Duggar decide to have some contact before marriage? In the video, he says, “We are about 10 years older than most of siblings when they start a courtship so it feels like we are a little further down the road when it comes to maturity in some areas.”

Prior to John Duggar talking about this, it seemed as if Jim Bob Duggar made the rules. Now, we can see that the children each have a say in the rules of their courtships.

Now, we aren’t sure how that conversation would go over with their parents. It might not be something that any of them want to try to talk about. It could get awkward!

John and Abbie Duggar and their marriage

John and Abbie Duggar got married in November 2018. They were engaged in July 2018. Before that, they were in a courtship. Obviously, this couple had a different courtship experience than the other Duggars have. Another major difference is John Duggar’s age.

Right now, he is 29 years old, which means that he was 28 when the couple tied the knot. Though this doesn’t seem too old to be getting married. Many of the Duggars get married in their early 20s though.

When John Duggar announced that he and Abbie were courting, he said, “So, I reconsidered the whole ‘bachelor ‘til the rapture’ thing.” Even he realized that he was getting married late compared to his siblings.

So, I reconsidered the whole "bachelor ‘til the rapture" thing.

No matter what, it seems like John and Abbie Duggar are happy to be married now. It will be interesting to see how their marriage differs from the other Duggar marriages, if at all!

Were you surprised to learn that the Duggars make their own courtship rules? Don’t forget that Counting On is back on February 11 on TLC!