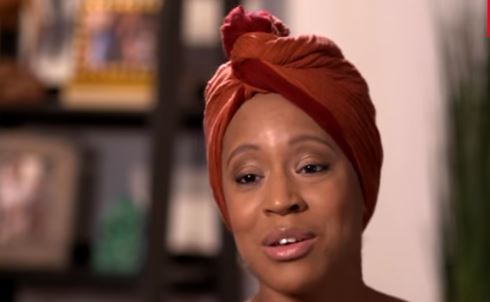 Tonight on a new episode of Seeking Sister Wife Ashley Snowden looked a bit different. Ashley and her daughters with husband Dimitri all had a red dot between their eyes. Fans wondered what this was and Ashley explained it. You would think it had to do with religion, but it actually didn’t.

On the show tonight, Ashley explained that this dot doesn’t have to do with religion at all. Instead, they consider themselves spiritual beings.  The family believes in universal awareness. They wear this dot so that they can have insight into that awareness. They actually feel like it represents a third eye.

Ashley isn’t the only one with it, though. Their younger daughters wear this as well. This might be part of the issue in finding a new wife. They need someone who feels the same way as they do.

Last season on Seeking Sister Wife, the Snowdens met with a woman who was a potential sister wife. Things didn’t work out, though. Dimitri actually slept with the woman and then she lied to Ashley about it when she asked her. This was enough for Ashley to decide she didn’t want her to join the family.

This season on the show the Snowden family is planning to try and find another sister wife. They shared that they have been trying to do this for nine years. The family hasn’t found their match just yet, though. Maybe it will happen this season.

The show Seeking Sister Wife is about finding another sister wife for your family. There are several couples that are on the show. Some already have more than one wife and others are just looking to add their second. Last season was pretty interesting. It will be nice to see if any of these couples can find a wife to add to their family this time around. They are all trying pretty hard and even have potentials.

What do you think of Ashley and Dimitri Snowden? Share your thoughts in the comments below. Don’t miss the new episodes of Seeking Sister Wife on Sunday nights on TLC.