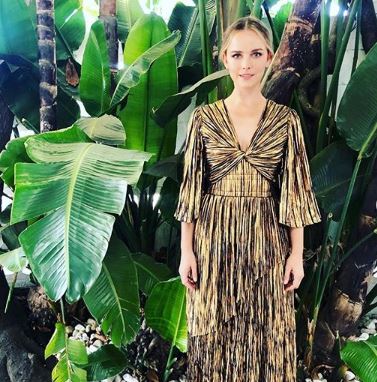 A Million Little Things does such a great job of confusing everyone. Honestly, though, I really think I may have solved the mystery.

In last night’s episode, Maggie Bloom appeared different to me. I don’t mean just her alien, egg-cone appearance after she shaved her head due to chemotherapy. She seems to belong to the group too easily. With no questions asked. Everyone adores her. I understand that Gary is sleeping with her. Rome wanted her to be his therapist. Sophie rooted for her as she crossed the finish line as if she was a part of the family. Grieving Delilah embraces her into the fold. The thing is that it isn’t usually that easy to fit in with a tight-knit group.

Maggie gelled so well with the ladies. Did any of that seem weird to you when you read the pilot script the first time?

Yeah. I definitely was questioning why everyone accepted Maggie so quickly and why Maggie was so gung-ho to just spend all of her time with a bunch of strangers, but I at least could understand it from her perspective. And then all that I needed was to go, “All right. Maggie’s going through something, and she needs a distraction,” and boy, the drama of other people certainly is a great distraction from the issues in your own life. And there is a real, instant connection with those women. That can just keep you there. And she’s an observer of people, and I think that it was right in line with how she operates: just going along for the ride and watching what unfolds, and being a part of it and being present, but with the others. I know don’t why. Everyone keeps saying, “I love this woman. I love this woman,” and I was like, “God. I really have to make her likable, because I’m going to really blow it if she’s not that cool.” [Laughs]

So who could Barbara Morgan be?

Meanwhile, we’ve all been all-consumed with trying to figure out, “Who is Barbara Morgan?” For many viewers, Ashley seems like a strong possibility. (I still hold firm to my belief that she’s Jon’s daughter – mark my words.) The arrival of Constance Zimmer’s character has most believing she is Barbara. Ashley doesn’t seem to know who Barbara Morgan is either. Last night, she spoke to Constance’s character so she is probably someone else, but that could still be important.

A few wondered if Delilah could be Barbara and possibly even in the witness protection plan. One fan speculated that Jon lead a double life as Barbara. (No, this wasn’t Kris Jenner mixing Jon/Barbara up with Bruce/Caitlyn)

What do we know about Maggie besides having cancer and moving when she gets too close to someone? She lost her brother which seems to have had a profound impact on her entire life.

Maggie is intelligent and compared her brother’s death to JFK Jr. losing sight of the horizon flying the plane. It’s still unclear as to whether or not Jon attended Harvard. I’d like to think he was an intelligent, wonderful man who got caught up in something that was bigger than him and he thought for a while he could change it and make it right again.

So here is my theory of how it could all come to light. Maggie’s cancer has returned. She passes away. (Eek, sorry, folk, this is all speculative) and her money saves the Dixon’s home. We learn that she was really Jon’s sister Barbara Morgan and therefore is Delilah’s sister-in-law and Sophie and Danny’s aunt. Jon was apologizing to Barbara for leaving his sister. Only time will tell, though.

We go back to the day before Jon’s death, …Maggie attempts to start her new life in Boston.

I can’t wait to learn why she chose to start over in Boston. Could she have been drawn there because of Jon? Do you agree that Maggie could actually be Jon’s sister Barbara Morgan? Don’t miss new episodes of A Million Little Things on Thursday nights.

Jessica Batten Of ‘Love Is Blind’ Gets Happily Ever After
Jana Duggar Finally In Love? Fans Discover New Hint
‘You’ Season 3: Call This Number and Get a Special Voicemail Message
Josh Duggar’s Co-worker Reveals Who Had Access To Office Computer
Lauren Bushnell Dishes On Postpartum Depression