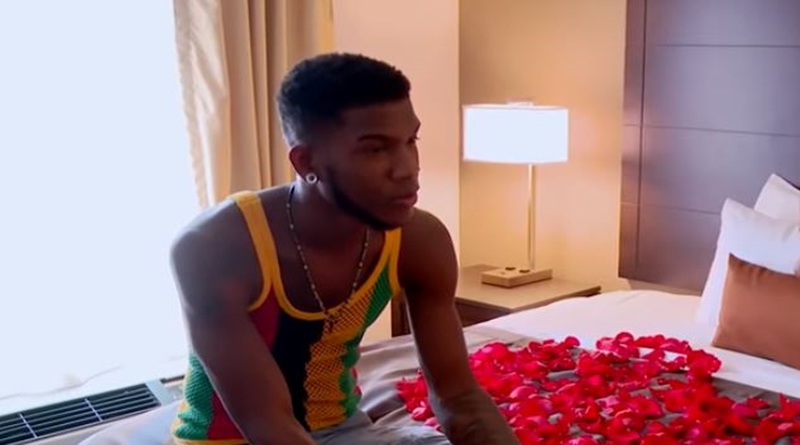 90 Day Fiance showed Jay Smith and Ashley Martson arguing over the fact that he used the dating app Tinder, soon after they married. It dominated much of the show and especially the Tell-All episode. Ashley never really got over it and Jay seemed to think the fuss was far too over-the-top. In fact, he claimed he just went there looking for friends. Now, he appears in an ad for another app named Limingtree.

Jay Smith’s ad which John Yates shared on Instagram shows him talking about the two social/dating sites. Graphically illustrating the difference between the two sites, he held up a lemon and a lime. The lemon represented Tinder and the lime, Limingtree. Tossing the lemon over his shoulder, Jay says, “Limingtree it is baby, there’s no better way to go.” Opening the ad, Jay Smith also told followers they should never make the “mistake” he made by using the Tinder App.

Actually, Jay comes across to 90 Day Fiance fans as almost blaming Tinder for his misfortunes. Although he said he went in there to make friends, across the world, most people know Tinder’s a hook-up App. Limingtree seems to be an App that people can use to make friends, arrange socials, and even date if they feel like it. The Caribbean social App probably offered Jay a place to do what he did on Tinder, without the negative outcome.

Ashley Marston posted on her Instagram story near Christmas time, that she and Jay would no longer be available to make cameos. Many 90 Day stars earn a living from that. Others try and use their few minutes of fame to get startup funding. Maybe Jay took up a role as spokesperson for this dating/social App because the gig brings in some much-needed cash. Actually, Limingtree probably took a wise decision using him, as fans from the Caribbean followed his 90 Day Fiance journey closely.

Fans of the show pointed out that the background of the Limingtree App advert takes place inside Ashley’s home.  Are they together? Is this on-again, off-again charade going to continue? Fans felt Ashley and Jay played them along just for the ratings. Here’s what some of them said on the Instagram post:

The best comment came from @meganpcoleman, who wrote, “Doing an ad for a dating app in your wife’s bedroom with Mr. & Mrs. on the wall. Priceless. Is their fake break over now or…?”

Limingtree App not just about dating

On YouTube, Limingtree describes their name as a Caribbean word. According to them, “liming” means “just hanging or chilling with friends.” “Lime” is a word used in Trinidad and Tobago and throughout the Caribbean as a synonym for “a gathering” or “to hang out.” According to matadorenetwork.com, this is correct. They write, “As a Trinibagonian, I can attest that this word is built into our vocabulary. Indeed, instead of “No Loitering” signs, we have signs that say, “No liming.”

If people meet, chill, hang out and socialize on the Limingtree App, obviously, people may hookup. Seeing people also hook up on Twitter, Facebook, and online forums, is Jay Smith’s new money-spinner as evil as some followers make out? What do you think? Could Jay have mistaken Tinder’s function for that of Limingtree? If people meet and makeout via Limingtree, should Jay, a married man, advertise it? Have your say in the comments below.

Jeremiah Duggar Forced To Start Business After ‘Counting On’ Cancelation
Wait, What? Does Isabel Roloff Plan To Raise Her Baby In A Van?
‘Love Island USA’: Shannon St. Clair’s Blast From The Past
‘General Hospital’ Spoilers, July 26-30, 2021: Elizabeth & Finn Crumble, Tell All
‘Sister Wives’: Did Meri Brown Get Drunk & Go Live On Instagram?