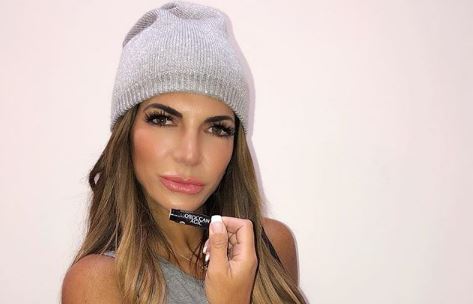 Teresa Giudice of The Real Housewives of New Jersey seems to be enjoying life while Joe Giudice is behind bars. Now it is being reported by All About the Tea that she was seen out with a mystery man on New Year’s Eve.

Teresa spotted with a mystery man

Teresa was out at the Miami hotspot, Big Pink for the New Year’s Eve celebration. It sounds like she had a great time there as well. Several people told Us Weekly that they saw her with another man. It obviously wasn’t Joe. He is in jail and won’t be getting out until March of this year. Then when he gets out, he will be deported.

“If you want light to come into your life, you need to stand where it is shining.” 🌅 Happy Saturday everyone! 😘

Teresa’s attorney, James Leonard Jr., shared that Teresa Giudice wasn’t doing anything wrong on this night out on the town. He shared the statement below with US.

“Teresa was out celebrating New Year’s Eve with a large group of men and women while she was in Miami. They are all friends and have all known each other for a significant period of time. It’s a night out with friends, nothing more than that.”

Teresa Giudice isn’t sharing her thoughts at all on this one. The reality star probably thought it was best just to be quiet about this one. There have been rumors in the past that she was cheating on Joe. Teresa never admitted that they were true, though.

It has to be hard being a single mom with Joe behind bars. Teresa seems to be doing well with the girls, but maybe she is getting a bit lonely. At this point, she still hasn’t revealed if she will be moving when her husband Joe gets deported. The fans can’t wait to hear what she decides to do.

Are you surprised to hear that Teresa Giudice was allegedly out with another man? Do you think she is cheating on Joe? Share your thoughts in the comments and don’t forget to watch new episodes of RHONJ on Bravo.

‘Bachelor In Paradise’ Returns But Will Chris Harrison?
‘Breaking Amish’ Betsy ‘Hot Mess Express’ For A Reason
‘Mama June’ Pregnant Rumors Swirl: Who Is Having A Baby?
Spoilers For ‘General Hospital’: Brook Lynn Rages As She Hides The Truth
Rachael Kirkconnell Reunites With Fellow Castmates Amid Matt James Rumors