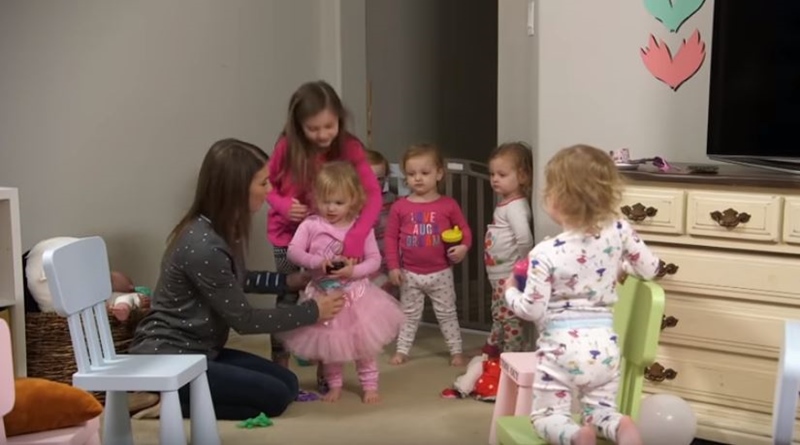 OutDaughtered fans desperate to see their favorite TLC family can catch them on the Food Network this week.  The new series of Winner Cake All for 2019 premieres Monday, Jan. 7 at 10/9c. According to the write-up on the Food Network website, Giada De Laurentiis hosts the cake baking competition.

Fans of OutDaughtered know the quintuplets arrived in April 2015. Three months ahead of the celebration of their fourth birthdays, the challenge to provide a special cake features on the Winner Cake All show. Actually, the cake also celebrates the birthday of Blayke just three days before her sisters. The quins turned four and Blayke turned eight-years-old. It sure looks like their birthday celebration’s bringing lots of yummy edible things.

According to EW, the whole family should feature in the show, so OutDaughtered fans, set your DVR now, so you don’t miss out. Anders Krusberg’s photo for the Food Network shows all the kids and Danielle, plus Adam Busby on the set. EW noted, “the premiere [is] for the Busby quintuplets.” Last year, Adam held a special breakfast involving donuts for the girls.

‘The Winner Cake All’ bake-off

The Winner Cake All competition gathers a bunch of clients and the competitors bake-off in various categories to try and avoid elimination. The series follows a set pattern each time and four teams square off. The first round should be the Decoration Challenge. That first round sees them create a topper which judges use to eliminate the first team.

The next round involves the teams creating cakes that they desperately hope meets the needs of clients like the OutDaughtered family. Fans of the show need to watch the Food Network to find out what theme the Busby’s chose for their daughters. Each step of the way means more eliminations for the chefs. The main prize of $10,000 guarantees strong competition among the teams.

Food Network’s other clients and competitors

Apart from the Busby family from TLC’s OutDaughtered, other clients include:

Competitors include, among others:

What do you think of the chance to see the OutDaughtered family on Food Network’s Winner Cake All? Is this an unexpected bonus for you? Remember to check back with TV Shows Ace often for news about Outdaughtered.