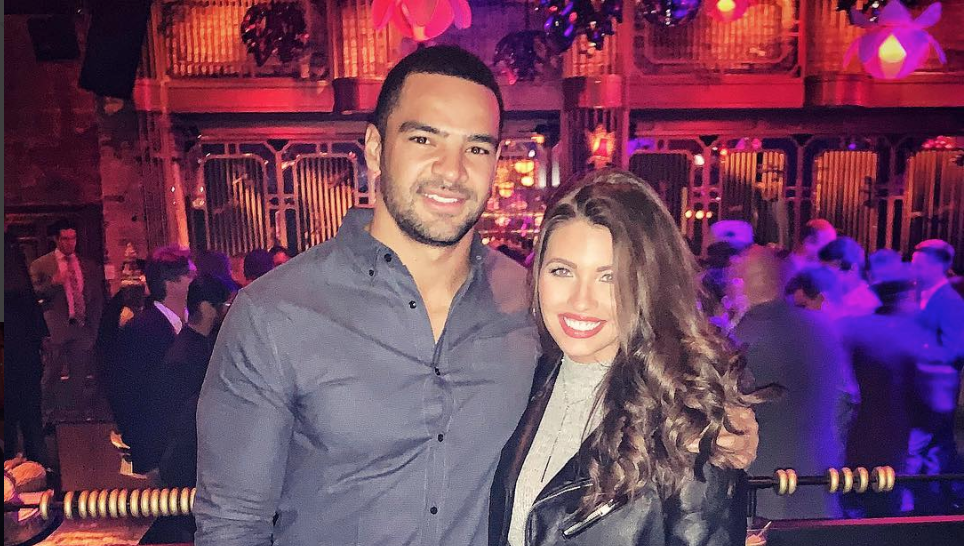 Clay Harbor and Angela Amezcua are one couple from The Bachelor franchise that found romance but not actually on the screen. The pair is constantly posting photos of each other on cute days so it would appear the relationship is going very well.

Who is Clay Harbor?

Clay was on Becca’s recent season of The Bachelorette. The second football star on the season came off as sweet and attentive to Becca. Colton Underwood was the other star football player on the show and is now the current Bachelor.

Clay decided to leave the season early due to injury after deciding that his career is what supports his family and he couldn’t risk losing that. Clay’s injury occurred during a football-themed date game he played against the other guys fighting for Becca’s heart.

Don’t judge each day by the harvests you reap but by the seeds you plant- Robert Louis Stevenson . . . Staying ready and working everyday hoping for the opportunity to get back on the football field and continue living my dream. . . Tag your favorite NFL football team and tell them to sign me ?

Who is Angela Amezcua?

Today is #GivingTuesday and I’m supporting @headbandsofhope! Their mission is that for every item sold, they donate a headband to a child with cancer! ?? Today, for every new follower they get, they will donate a headband on top of the purchases too! ? My headband and sweatshirt available now! Help me to support this great cause! PS – cute dog not included ? #HeadbandsOfHope

It looks like Clay and Angela found love off-screen despite their love mishaps on screen. The couple posted several photos on Instagram confirming how much they like each other. From the posts, it looks like they have been traveling the world together and they may have even moved in together according to US Weekly in October.

The stars aren’t ashamed to be Bachelor alumni and even talked about it in one of their Instagram posts. In one Instagram post, Clay made a joke about making it past hometowns.

Hometowns went well definitely think I’ll make it to next week ? kidding aside great weekend with this lady! Love me some summertime chi! Also shout out to the @godfreyhotelchicago for the hospitality. #staycation #hometowns

What do you think of Clay and Angela together? Do you think they are a match made in heaven? Let us know what you think of the couple in the comments.

Don’t miss the season premiere of Colton Underwood on The Bachelor January 7th on ABC.