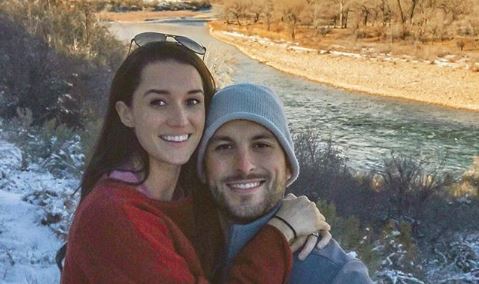 Tanner and Jade Tolbert’s little girl Emey has started walking! She is 16-months-old and fans have been wondering when she would take her first steps. Jade Roper Tolbert went to her Instagram page to share a video of her little girl.

Just recently, it was revealed that Jade was getting a hard time from people about her daughter not walking yet. A lot of fans explained to her that their children didn’t walk right away either. Jade didn’t seem worried about it, but now Emey has started walking. Check out the video below that Jade shared on her Instagram.

As you can see, she looks adorable doing it. The look on Emey Tolbert’s face makes it appear that she is very proud of herself. Jade Tolbert is obviously proud of her little girl as well. It looks like she is doing great.

Tanner and Jade Tolbert me on Bachelor in Paradise. These two fell in love and have been together ever since. They are one of the couples that make contestants want to do the show in hopes of finding a love like they have together.

Tanner and Jade Tolbert just made a big move in life as well. They are on a road trip right now to their new home. The couple hasn’t shared yet where they are going to be living, though. They left Kansas City, Missouri and headed east. Now they are in Las Vegas. They are staying in a hotel there, so it is obvious that Las Vegas isn’t their final destination.

The fans can’t wait to hear where they end up. They have been sharing a lot of updates, but so far where they are doing is a secret. It is starting to look like they could be headed to LA based on the path they are taking. At first, there was speculation they were moving to Nashville to be closer to Carly and Evan Bass. They are going the wrong direction for that move, though.

Don’t miss watching Colton Underwood as The Bachelor 2019 when it starts airing in January on ABC. The spoilers are already coming out and it looks like an interesting season.