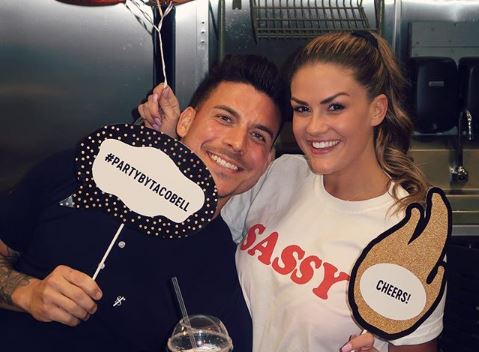 Have you seen Brittany Cartwright’s new Instagram photos? In one picture fans say she looks like she has a baby bump. Brittany quickly shut down the rumors by posting another picture from a different angle. Brittany is engaged to lover Jax Taylor, so it wouldn’t have been a shock to anyone if a baby was on the way. Sadly they aren’t expecting a child anytime soon, and Brittany snapped back in the comments by denying the rumors.

Brittany shut down all rumors by commenting back to the “rude” fans. She commented back to one commenter by saying “how many times do I have to respond that I AM NOT PREGNANT before you guys stop. This is all so rude.” There were some respectful fans who stood up for Brittany but the majority were just body shaming her on her own post.

The reality show star didn’t take down her post in the black dress, which fans are really proud of her for. She shouldn’t have to feel like she needed to take it down because of some hateful people. A lot of women look up to Brittany in so many ways and she just gave them another reason to. Jax and Brittany are getting married soon, though. Children are something they want in the future, just not yet.

The engaged couple are getting married in 2019 in Kentucky, but they haven’t released a date yet. Viewers were glad to see them get over the bumps of their relationship, like Jax cheating on Brittany with another Vanderpump Rules star.

Here are the pictures she posted on her Instagram. One fans thought they saw a bump in and the other one she posted was a different angle.

How about this angle? 😘🙄

A new season of Vanderpump Rules is coming

Besides the fact of his past, Jax says how he will be having two bachelor parties, one off camera and one on camera. He’ll be having some fun, but how out of hand will these get considering Jax’s partying past? Viewers will also get to see their engagement happen.

Vanderpump Rules has a new season starting tomorrow, December 3. Fans have heard about James Kennedy’s season so far, especially cheating on his girlfriend with guys? This season will be crazy just like the rest of the past seasons! What other crazy things will occur? Viewers are so excited to see the eventful season unfold, and for all the drama to happen.