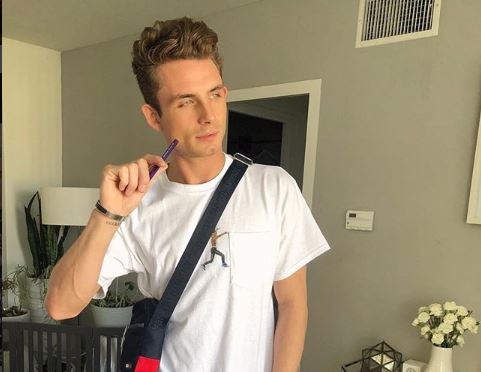 Vanderpump Rules fans know that James Kennedy isn’t very liked by any of his co-stars. There’s some type of argument with James every episode he’s in! Viewers have seen that he has been close with Lala Kent in the past and had many arguments over the years. Are they still friends? No one ever knows, it depends on the day. James also had issues with Jax Taylor that seemed to be finally worked out last season.

As many know, James Kennedy has had a big struggle with substance abuse by drinking too much alcohol.  Lisa Vanderpump, the owner of SUR, has even fired James due to his addiction in 2016, then insisted that he needed to get help. When James would drink, it would lead to very big arguments that he caused. Kennedy would get help and always have short lengths of sobriety but would then fall off the edge again. Lisa has tried to do everything that she can to help, but James has to want to do it as well.

An unknown source stated, “It’s even worse than before, James is partying hard and the worst part of it all is that he is not admitting that he has a problem.” Then viewers are finding out that James has cheated on his girlfriend Raquel with both men and women. James is denying that he is possibly bisexual which is no shocker to anyone. However, James and Raquel are still together. He recently shared about their new apartment. The source also makes a comment about how young men look up to James, “What is really sad is that so many young men look up to James as a role model.” They also say, “By him lying about his sexuality, they believe that it is wrong to be yourself. The cast calls him out on this in the upcoming season and he continues to deny it.”

By the looks of it, none of the cast want anything to do with James Kennedy anymore. “At this point they just want him gone” states the source. It would be shocking if Lisa got rid of him totally, though. If you want to see how the next season with James turns out, watch Vanderpump Rules on Bravo when it comes back in December. If you watch you will also be seeing Jax Taylor and Brittany Cartwright get married. Also, Stassi Schroeder bring her new lover to the show!