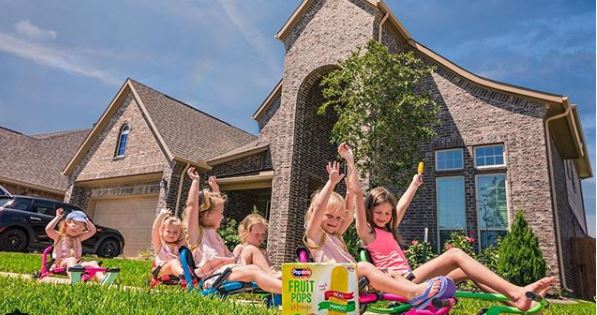 Outdaughtered is an adorable reality television show about parents who are outnumbered by their daughters. The Busbys are parents to six children, five of them being girl quintuplets. Toddlers are a fun age to be around, especially when a party is involved. Danielle Busby took her eldest daughter Blayke to a themed birthday party where they had fun making their own pizzas. However, only two of the quintuplets were there to attend the entertainment. It looked like an easier day for mom only having three girls along.

Adam and Danielle divide up girls for a fun day

Adam Busby had an awesome time with the other three of his girls with a breakfast outing while some errands, furthermore, he documented his father-daughter outing with posts to his Instagram account. According to the photos, it shows three of the quintuplets showing off their prized bath bombs they were rewarded. Daddy-daughter time is just as important as mommy alongside daughter time.

Today was one of those divide and conquer kind of days. @dbusby took 3 to a birthday party and i took 3 and we had a breakfast date then ran a few errands! My three got rewarded by getting to pick out a new bath bomb at @braveboutiquelc ! #outdaughtered #dadlife

The pizza making party was entertaining for the entire group, especially when creating their masterpieces they became messy in the process. What child doesn’t like to prepare their own food while getting their hands dirty at the same? Adam and Danielle Busby of Outdaughgtered took a different approach for the day by separating the girls to give them quality time with each parent. Occasionally you have to divide and crush the day. Blayke enjoyed having her little sisters, Riley and Parker at the party with her, moreover, she invited them along to savor the celebration together.

Blayke had such a blast this morning at her besties Pizza Making 8th Birthday party. Riley and Parker Kate got to tag along and enjoy the fun too! #Itsabuzzworld

Each girl was able to make and decorate their very, own personal pizza. One of the pizzas was layered with an enormous cheese amount by one of the girls who attended. What is a pizza-themed birthday party without a themed cake? There was one and it was the icing to the perfect party. The girls enjoyed themselves making an enormous mess in the process, every child’s dream but every parent’s worst nightmare. The pizza party was a giant success among the girls with cheese everywhere in the pizza station. They sure had an enjoyable time making their very own homemade pies because who doesn’t love to get messy.

Blayke, all dressed in her adorable apron along with her chef hat she was ready to give pizza design a shot. She played the part of a pizza artist. Unfortunately, Riley and Parker didn’t have the same attire as their older sister. The video of the girls shows just how much fun pizza making can be and maybe they should try this at home as well.

Stay tuned in for the next episode of Outdaughtered on TLC to see what the quintuplets and their family are up to now.