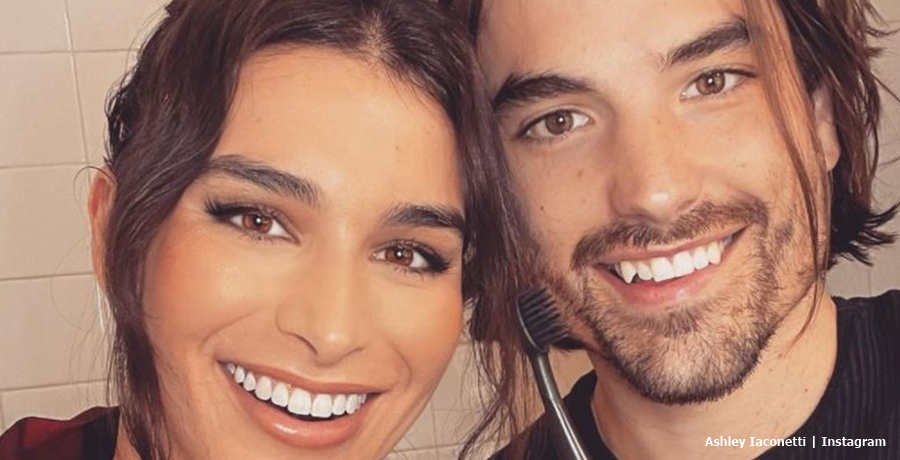 Fans are excited for Bachelor in Paradise couple Ashley Iaconetti and Jared Haibon to welcome their baby into the world. Everyone knows it’s a baby boy. However, Ashley has been keeping his name under wraps. She revealed to fans that she’s had this name picked out for a long time. Ashley said she doesn’t want fans to use the name before she does. Therefore, she’s keeping it under wraps until his arrival. However, a recent Instagram post has fans wondering if she could have just given the name away.

Did Ashley Iaconetti give away her baby boy’s name?

Ashley Iaconetti shared a picture on Instagram that has people wondering if they cracked the code to her son’s name. She is sitting in a chair with her sister Lauren and her podcast co-host, Naz Perez. with their hands on her belly. She captioned, “Feed the belly. Rub the belly. Worship the belly.”

However, it’s not what the photo says or who’s in it. It’s the shirt Ashley is wearing that has caught the eye of fans. Her shirt is covered with photos of Leonardo DiCaprio. Die-hard fans of Ashley know she is a huge Leo fan and her favorite movie is Titanic.

Heavy shared comments Ashley had previously made about Titanic and Leonardo DiCaprio. She said, “I think it’s funny I saw my favorite movie, Titanic, for the first time at the age of 10 and no other movie will ever top my love and nostalgia for it.” She continued, “My sister and I would watch the entire three hours and then look at each other and without words know it was time to rewind it and watch it again. Our hearts pounded as we experienced a serious crush and a non-Disney romance for the first time… I pity the girls who didn’t get to experience Leo-mania. Praise be that they have Harry Styles.”

So, fans are thinking the name has to be Leo, or Jack, or even Dawson. Could they be right?

Other clues she’s given

Ashley has also given other clues about the baby’s name. She said in a previous post that many people think the baby’s name will be based on a passion of Jared’s. Guesses came in regarding his favorite football team the New England Patriots. Ashley quickly shot down those guesses. She said the baby’s name actually stems from one of her passions.

Fans also started guessing Jack Dawson or Leo as possible names even before she sported the shirt.

What do you think the baby’s name will be?