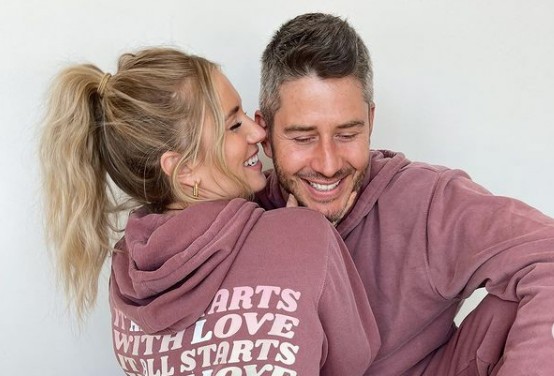 It’s no doubt that The Bachelor Arie Luyendyk Jr. and Lauren Burnham make adorable babies. They now have three children. Their first-born daughter and now twins. So, with three kids already fans are wondering if there are more in their future. Arie spoke and is revealing their plans for the future.

Arie and Lauren went to Instagram for a little Q&A yesterday and shared some interesting information. Fans asked a variety of questions including products they used for the twins as well as advice for a new mom. However, it seemed one of the big questions of the night was if these two lovebirds plan on having any more babies.

Lauren asked Arie about having more babies and he adamantly said no way. So she said, “vasectomy time?” He agreed completely and said yes. So, Lauren told fans they heard it here first! Sounds like the twins are wearing these two out!

Another fan asked an interesting question. They wanted to know if Lauren had a nose job. Arie asked her and she looked stunned. They both said that no Lauren’s nose is all-natural. No plastic surgery on her nose. He zoomed in and whistled to show fans her adorable nose. The fan was sure to point out that it looks great they were just curious.

They were also asked if they ever fight. Lauren and Arie both admitted that yes they do. They are a normal couple with normal disagreements. However, they balance each other well and work through their differences quickly.

Learning to take care of the twins

Arie and Lauren both admit twins are hard. They wake up at different times so the couple admitted recently they have been taking turns sleeping in the twins’ room. They said one night Arie will take care of them so Lauren can sleep. The next time they swap.

They have been in Hawaii at their home and are loving life. Fans have asked for a tour of the house soon.

What do you think about Arie saying he was ready for a vasectomy?